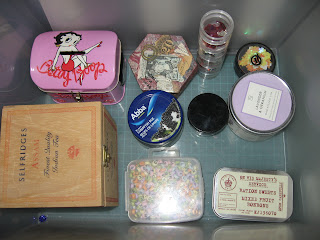 When I'm showing photos of my tidying up, I'm never sure whether to start with the end result (a nice tidy drawer, like the one above and a windowsill with a big empty space like the one below) 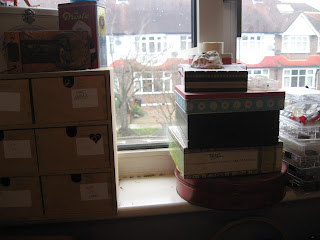 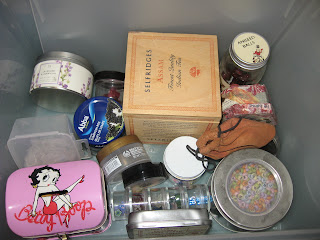 and here are the three plastic containers which were in that space in the windowsill, and which have since been emptied (one was empty already) and put away in the cupboard in the loft which has storage boxes in it. 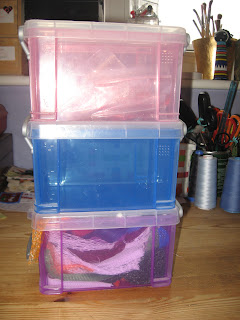 Several things were got rid of -  this tea box had all the bits from the sides of pieces of hand-dyed fabrics I've made  - I had been saving them because I might do something with them someday. We know how that goes!  I emptied out these bits and instead used the box for the ultra-fine glitter which was in the top of the three storage boxes above. 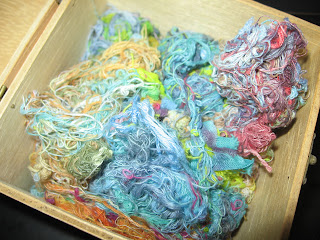 Not sure what this stuff was doing in that drawer in the first place - a little bag of memorabilia. I've moved it to a more appropriate place (that's my tassle from my college graduation cap - it used to be black). 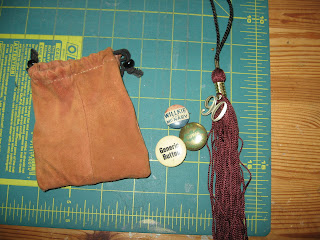 These three boxes are now empty - I've put them for the time being in a boxes of storage pots which I have set aside - they may not stay there forever in the grand scheme of things, but at least there will be some small containers if I need one during the rest of my clear out. 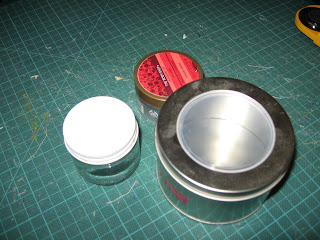 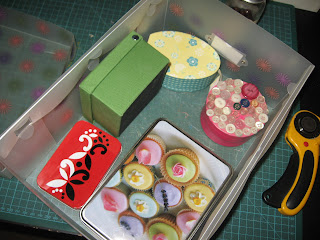 Obviously the drawer in the top photo is nearly empty and could hold a lot more, but as the storage unit that those drawers are in will be something which goes in my grand reorganisation (it will probably be given to Alex for his stuff), the less that's in the drawers which needs to be stored elsewhere, the better.

That hand-dyed fiber looks yummy - and I would have known exactly what to do with them!

I would know exactly what to do with those bits too!! they look delicious - also wish I could tidy my space up as you have been doing - I have just gone off my costume making again!!