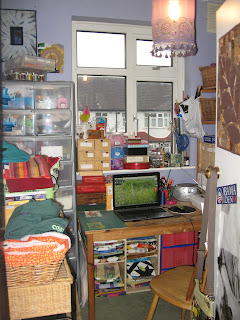 For as long as we've lived in this house (15 years +) I've had the little box room as my sewing room. And it's been lovely. However, now that I am working full time again, and now that the kids are older, I've been thinking that it's not a very practical use of space. So we have a long-term plan (meaning, over the next few years) to change the way this space is used - it will eventually become a bedroom for Alex (he will get a loft bed, with various things like a desk and wardrobe tucked underneath it).  The room that he has now (which also acts as a guest room and has a lot of storage space, as it's a loft conversion room) will become Sarah's, and Olivia will get to keep the room that she and Sarah currently share.  However, this is a change that will happen only gradually and over time, partly because we need to convert a few other spaces in the house first. We will build some new shelves and workstations downstairs in the computer room (as well as replacing the floor in that room and redecorating generally), and part of that space will be where I can store as much of my sewing and craft equipment as I can - the stuff I use a frequently - and it will include a desk area where I can set up my sewing machine or a laptop, with ease of switching between the two (as you can see, we already use my sewing table as a laptop station sometimes). 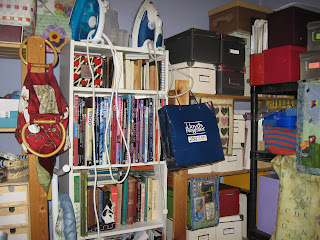 However, I do have A LOT of stuff crammed into my little room.  Even though I clear it out every few years (for instance, here's the last one), there is a lot of stuff.   This is because I have had the option to store lots of stuff, because I have a dedicated space. But once I no longer have that option, I shall have to be really ruthless.  Frankly, I'm not a hoarder anyway - I'm quite ruthless about getting rid of things I don't need, but because I've dipped into lots of different arts and crafts, there are lots of things hanging around waiting for me to use. Or not.

So, my plan is, over the next year or so, to begin to get rid of things - some things I know I can get rid of; for instance, I have a lot of supplies from fabric dyeing, which is something I enjoyed for a while, but will really never do again, unless perhaps I move to a house with a proper, separate, plumbed workshop. In the event that happens, I'm sure I can accumulate supplies again. I have lots of bits and pieces which I've saved just in case they might come in handy - I'm sure lots of those can go.  But in order to save myself the stress of trying to sort the room out all at once after the new workspace is ready, I plan to declutter a little at a time, and see how much I can get rid of in advance.

We can't start changing the space in the computer room until we get rid of a large gerbilarium, and we can't do that while the gerbils are still alive, but they are very old now (for gerbils), and we won't get new gerbils when these ones die, so I'm sure the time will come before long.

It will be a shame to lose the workspace in some ways, but it's really not a sensible use of our rooms, as I only use it on weekends.  With my sewing machine downstairs in future, it's even possible I will occasionally sew in the evening, as it won't be noisy when other folks are sleeping nearby!  I'm sure I'll keep you posted when it all actually starts to happen.

Oh, and there may be some giveaways along the way!

Thanks for stopping to see me. Somehow you were dropped from my subscription list but i have added you back. I am sad that you are losing your sewing space but it is important for the kiddies to have their own space as they get older. I have set up my machine in the den with the tv and do find some evenings i will sew. Hope that works for you.

And tbr is a much better word for those orphan books. :)

Oh my goodness!! That's a change, but won't the kids be leaving home soon anyway ;) (When Uni calls you can have Sarah's room! So perhaps just store it somewhere in the interim - except you're not a horader - like me!!!)

Giving up your space is a big deal. I enjoyed the peek into your studio.

I hope the renovations go well.

Hope all the transitions go to plan and that you find a space to carve out as your own downstairs.

Sounds like lots of change ahead, but that's exciting :) I too have lots of stuff that I've accumulated from trying things out and realistically know I won't go back to. I should have had a good clear out before I moved but I got lazy and it all just came with me, lol

And speaking of give aways, my little parcel arrived yesterday -- thank you so much!