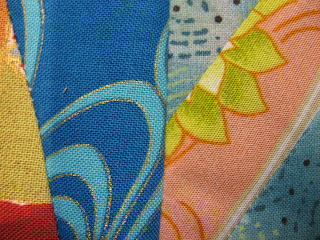 I am once again taking part in the Cotton Robin round robin, organised by the lovely Julie. As before - and as is usual with many round robins - we aren't supposed to show what we've done - at least, not unless you do it in some way which disguises what you've done. You can show the border you made, as long as you don't show the centre block, but I didn't want to do that because I used enough of the feature fabric which was enclosed with the centre block to make it pretty obvious which block I had - and from that point, it wouldn't be hard to see how what I did would go with the centre....

Anyway, I have chosen instead to give a little tease photo - this is a photo of a very small section of the piece  - the photo is larger than actual size - and furthermore, it's laying on its side - but I shan't say which side!  So I think even the owner of the original centre won't be able to work much out from this shot.

If you want to see the centre blocks we all submitted, check out this post on the Cotton Robin blog. And don't worry, when it's all over and done, I'll share proper photos!

I had to do a double take when I looked at my side bar...I have it set up to show a picture of the blogs I follow with their new posts! And there was your picture..then right below it was your picture again!!! I am also doing the Cotton Robin..so that was your second picture!! Looking forward to seeing all the CRs when they are finished!

That would make a great quilt!