Clearing out, part 1 (with giveaway) 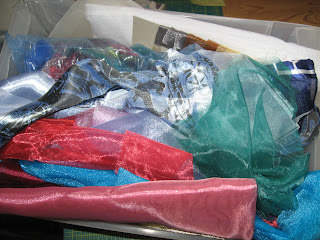 As I mentioned before, I will eventually have to downsize my sewing room - or at least, store all the stuff I want to keep elsewhere. This move is a long way off, but it doesn't hurt to start going through drawers and getting rid of things now - I figure if I do one or two small storage sections a week, I might actually be done by the time we move stuff around a year or two from now.  Maybe! 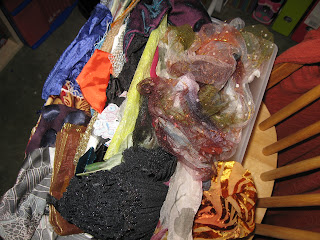 So I started with two drawers full of misc, non-quilting fabrics. Mostly sheers and other funky textures.  These are fabrics I use in small bits when making ATCs and occasionally the small art quilt.  Some of them were bought by me, some were given, but most of them are quite big pieces, especially the sheers.  Frankly, I will not use a metre of any sheer fabric, probably in my lifetime, and certainly not in the next 10-20 years. So a lot of the bigger pieces, I cut down, put part in the save pile and part in the giveaway pile. I didn't get rid of ALL of anything, just parts of the larger pieces... 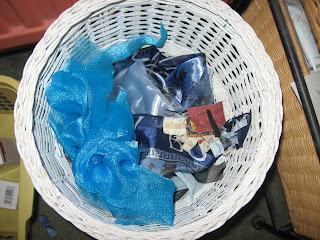 A few really oddly shaped bits went in the bin - including the offcuts of a scarf which I bought in a charity shop for next to nothing and used in an art quilt for round 4 of Another Little Quilt Swap. 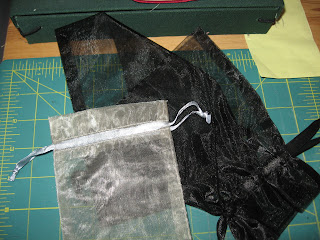 A few sheer bags will go in a pile of stuff to go to a friend who sells at markets and can probably use them for something. 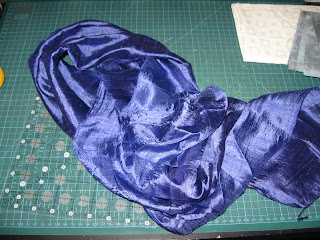 And this scarf will go in my closet with my scarves, to be worn.  I don't remember this at all - wonder how it got in my stash? 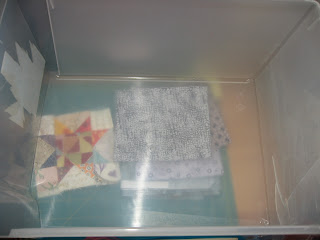 All this clearing out left me with one empty drawer, 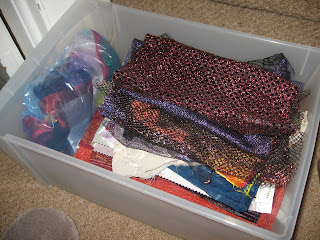 one tidy drawer full of interestingly texture fabric in amounts that will still keep me going until the end of time, but which are reasonable rather than stupid, 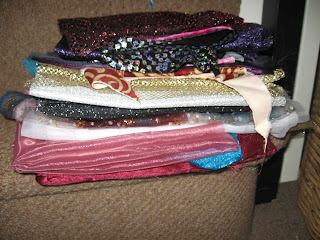 and one pile of mostly sheer and slippy, shiny fabrics which I am offering to a good home. Although a lot of these are sheer and not heavy, I am going to limit this drawing to those in the UK or in the US (because my mother is visiting in a few weeks' time and can take it back with her to post there) unless of course you'd be happy to reimburse postage by paypal if you win, in which case, you can be from anywhere.   If you are interested in having this stack of miscellaneous goodies, leave a comment by the end of March, and I'll do a drawing at that point...

Kate, if it's sheer, and it's shiny, you know I'm going to lust after it.... Good luck with your stash packing.

I found your giveaway and your blog via Julie (Mixed Media) on facebook so I've now added myself as a new follower and would love to be in with a chance to win your very generous giveaway and help you along with your stash clearance of course lol ;o)

I wish I could have a clear out occasionally but as I re-use and re-cycle nothing gets thrown away - the pile just grows and I love it really!! I would love to be in a draw for your fabrics - I can always make use of 'stuff'!!

That looks a fun pile and I would certainly be interested in having it. I would , like you keep a small amount in my stash for art projects but would use at Rainbows, brownies and Guides for all those craft projects that the girls like. They are always after sheers and I generally have to buy bits for the projects.

I see some 'Essex' fabric in your stash along with the sheers so I am definately going to put my name in the pot. I like in the UK but I don't see why you should pay the postage so would be happy to re-inburse you :)

Oh yes! I would love the shiny, slinky, slithery, slippery, sheer & not so sheer fabrics! I have just, in the past couple months, started playing with those types of fabrics and I AM IN LOVE. Thanks, Kate, for the chance to win some goodies. I promise if I win to put them to good use :)