Well, as I mentioned, I went to the Knit & Stitch Show this year, and one of the things I spent a lot of time looking at was cross-stitch kits (though actually, I prefer charts to kits as I have a lot of supplies in hand already anyway and I don't really like Aida cloth that much, prefering linen or similar) and samples.

And I decided that my tastes in cross-stitch - both to look at and to actually stitch - have changed quite a lot since I first started doing it. This is partly because there is a lot more variety available now, but partly just because I'm older and my tastes have changed. I really like a lot of these simple country style cross-stitches with lots of open space and little or no back-stitching. Partly, yes, they are quicker to stitch, but partly, I just like them.

So, anyway. In the interest of being realistic about what I actually want to stitch with my limited time and to make me feel less guilty about not finishing pieces I've started (even when I don't like them very much) I have decided to give away some patterns, along with the partly stitched pieces, where appropriate. I don't know why it's taken me this long to do this with my cross-stitch; I did it ages ago with partly finished quilts & blocks I didn't much like!


I am keeping a few of my old kits & patterns, which I might actually do, but I think if I still feel ambivalent about them in another year or two, they might go as well.

If you would like any of these pieces, please leave a comment. Preference will go to people who are regular commentors (if more than one person wants a piece) but feel free to ask anyway, even if you are new here - I'd like these items to go somewhere rather than nowhere. And though you can have more than one if no one else wants a piece, I'm going to try to spread them around a little bit. I don't want anything in return for these, though if you are not in the UK and postage is high, I wouldn't say no to a little fabric or something in return. I'll leave it open for a few weeks and then let people know who gets what.

You are NOT IN THE LEAST BIT obliged to carry on working with a piece I have started - please feel free to chuck it in the bin if you'd rather work on a different count or colour fabric or even if you just think my work is rubbish to start with. But I thought I'd offer the partly worked pieces as a starting point - could save you some time and effort. 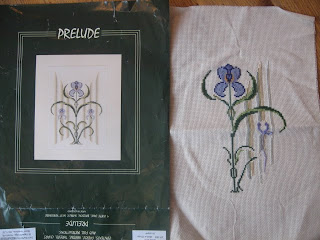 1. Iris. I ought to like this. It's nearly done, I like Irises, I like the Deco style, but I just am not inspired by this. It's on 16 count Aida and was a kit, so has the threads included. 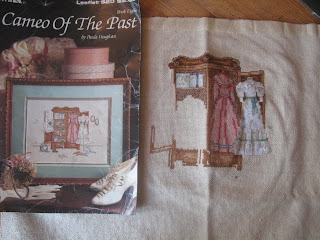 2. Victorian wardrobe. Yeah, I know, I was working on this recently. And it's not that I don't like the design, I do (though I don't LOVE it), but I remember now why I never finished it - it really annoys me - partly because there are so many colour changes so often, but mainly, it's the choice of linen, which I really dislike. It's about 16 count and although it's not Aida, it's really nubbly and I hate it for half-stitches. I find it very hard to be enthusiastic about this piece and will almost certainly never finish it, so would be delighted for it to go to a good home. Or any home. No threads included as it was only a chart and I'm stitching it from my DMC stash. 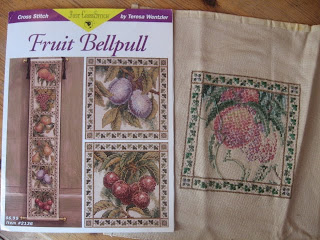 3. Fruit Bellpull. I used to be really attracted to mammoth pieces (I think because a lot of the smaller things were kind of naff), and though I like this, I'm not in love with it, and I know I'll never finish it. I originally thought I might finish just the peaches, but realistically, even that doesn't really interest me. There's only enough linen included for the peaches, but the patterns are there for all the fruits shown. This is on either 28 or 32 count linen - I can't really work up the energy to count it! No threads included. 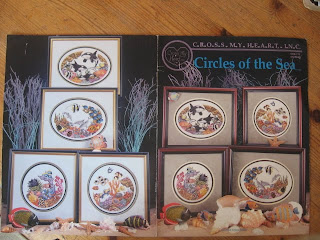 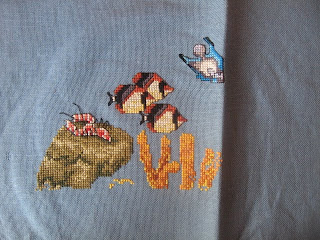 4. Fish. This is one I started a long time ago with an eye to possibly giving it my my mom & stepdad for a room in their house which had a nautical theme. They sold the house, though and I'm not really interested in finishing it. The booklet includes patterns for the one I've started and a bunch more. Blue linen, again a high count. 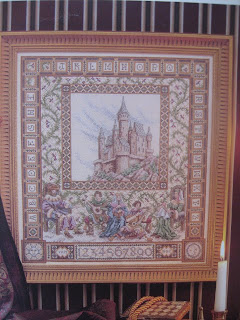 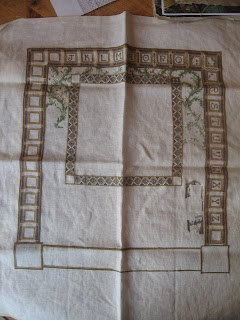 5. Castle Alphabet. I'm not really sure why I ever started this one - I really like the border, but the rest of it isn't really me. Which probably explains why it hasn't been worked on in over 10 years. High count linen - 32 at a guess. No threads. 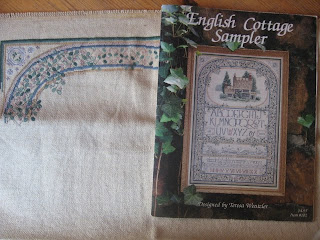 6. English Cottage Sampler. I think this project just has the kiss of death for me. I started it once on a finer count fabric, but really messed up the counting, to the extent that I simply threw that away and started again. Unfortunately the re-start was on that low-count knobbly linen, so it didn't get very far. I could re-start it again on a higher count linen, but I don't like it as much as I used to, plus also it feels a bit jinxed. There's not much stitched on this, so you wouldn't need to feel guilty about throwing my work away and starting again... 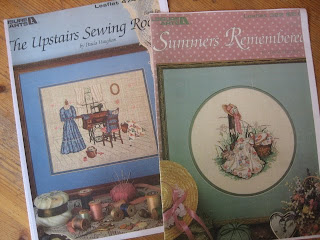 7/8. Paula Vaughan patterns. These are colour photocopies of two patterns which I simply won't ever stitch. 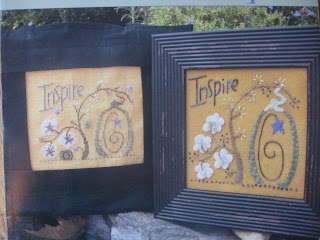 9. Inspire. This is a double pattern - on the left cross-stitch, on the right, wool applique. I've stitched it. I won't stitch it again. It came with some decorative buttons, which you can't have, but I'm sure you could find something which would work. This was quick and easy and very pretty.
Posted by Kate North at 11:08 pm

I do like the Inspire cross stitch/ tapestry design - but I don't want it, I hasten to add! I cannot do counted work - not if my life depended on it. But I am full of admiration for those that *can* do it.

Hi Kate! I am interested in the Inspire piece and would be happy to send you some fabric goodies in return for postage.

I have been bad - I still keep up with you every day, I just don't post as often. Your work continues to inspire me. :o)

Well thanks for sharing and I'm so glad that I'm not the only one that does this. I go form one item to another and most of them are not done but the ones that are done I love.

That #7 is one that I actually did! It's hanging in my guest room. I think it took me 2 years to finish.

A lovely selection - but just not my thing anymore - I also have a part finished version of that English Cotton Sampler and mine is a lot further on than yours but I shall certainly never finish it - well done for pruning, good luck with finding new owners - maybe I should carry out a similar exercise

I wanted to comment that is a lot work in progress. Cross-stitch is not my thing now or not for a long while but thanks for the offer.

I'd love to resurrect either of the two bigger pieces - the castle alphabet or the English cottage sampler. I've just finished a William Morris tapestry (back from the picture-framer yesterday) so I've got itchy fingers for another stitching project...

Would be happy to send fabric or other goodies by way of payment in kind. Thanks for the offer!

I have a couple on the go at the moment but I do like picking them up, doing a little then putting down for a while. Find them handy to take with me when I go away. I like either of the Paula Vaughn patterns or the Victorian Wardrobe. More than willing to exchange for fabric or threads.

Happy to hear you are not giving up entirely on cross stitching as I enjoy watching your progress. I've been encouraged by you to start a small piece again. I'd be delighted to finish Iris No 1 and to repay the postage together with fabric goodies in exchange.
Norma

Oh Kate, I as so glad you posted this piece. Makes me feel better about the cross-stitch pieces I have started and not finished.
Good idea about giving things away.

I think my Mum would really like the Victorian wardrobe - she has done pieces similar for one of her B&B guestrooms. I'll cjeck with her later as she is coming down to visit but Can I put in an early request for her?

Hello.Thanks for the offer.
My English is not good (I used Google translator). I'd be delighted to finish Iris, Inspire or Circles of the sea. I´m from Argentina. Would be happy to send things for embroider, buttons or souvenirs by way of payment. :)