...as Olivia persisted in calling the Knit and Stitch show, which we went to at the Alexandra Palace today. This may be because, as a non-knitter, I tend to look less at stall-holders who sell solely knitting related items. I do look at the actual knitting type art on display, though I tend to drift more towards the stitch side of things, I think, but in terms of shopping, even when I'm not buying anything, I tend to browse stitch stuff more - and mixed media art stalls.

Anyway. I didn't take many photos - in fact, any - because so many of the things I would have photographed had "please no photography" signs, and anyway, I couldn't really blog them due to copyright, etc. Suffice it to say, I saw some things I really liked, included a display of Janice Gunner's work (went back to that several times;, some fabulous vessels by someone whose name I've forgotten now, but who was located just as you went into the small, largely guild-stall room on the right hand side of the entrance hall (if you know who I mean, please let me know); some pieces combining photography, found objects and stitch; some very thin porcelain pitchers by a woman called Katie someone (I think - and I think this was in one of the degree shows) - she made paper models to start with and had some of these displayed with the pitchers and a cake stand. Also in the same area there were some pieces of wrapped wood which I really liked. And there was lots more I liked. Too bad I'm not only crap at remember the artists' names, but too cheap to buy a catalogue! You'll just have to use your imagination. 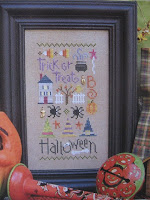 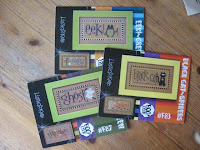 We did do some shopping as well, though not a huge amount. I didn't buy any yarn* as I am not a knitter and I avoided the art type stalls completely as I find it hard not to be tempted. I did buy a few cross-stitch patterns, which is what I had planned to do, so you will be seeing some of them in the near future. In fact, here are a few seasonal ones, now... No, I don't plan to have all of them done by the holiday in question, though I have started the sampler on the left tonight and think I can probably finish it well within the three weeks. The ones on the right, I adore, and was rather impressed with myself for only buying three of them (with 6 words - two each) - there were 6, I think, and a bookmark showing them all done as a single piece, which I decided was foolish as I'd never finish it, whereas individual words probably stood a good chance. Olivia helped me pick which were the best ones, and these are what we came up with. My kids love having Hallowe'en decorations, and I feel that the least I can do is try to accumulate a number of them that are tasteful...

I also came to a decision about some of my cross-stitch - but more about that in a separate post.

Tomorrow I have very little on my agenda, and all three of the round robin type things I need to work on (two blocks for the Around the World Quilt Bee, which I can blog about and the Bloggers Round Robin, which I can't) have finally arrived, so I may actually do some sewing tomorrow. That is, if I can move all the painting stuff out of my sewing room and actually plug my machine back in (it's still in the chair, which was the only free surface when I collected it from the shop on Thursday).

*Actually, I did buy one ball of sock yarn, but it's a gift for a knitter friend, so I'm not going to show a photograph of it. I'm not going to say who it's for or for what occasion or whether the friend in question is even a blogger/blog-reader, so if you are wondering, well, you'll just have to keep wondering!
Posted by Kate North at 10:25 pm

I have to force myself not to look at many of the enticing stands at these shows as I know I'll end up buying things I never get round to using - Ahem, Markal oil paint sticks and card making supplies anyone?

Love the new cross stitch patterns. Well done you for not getting tempted at the other stalls

Shame I didn't know you were there on Saturday. We could have meet up for coffee or somtehing. I disn't buy too much either but stil a few things. You can't possibly come out empty handed with all the temptations under a single very beautiful roof
Celine