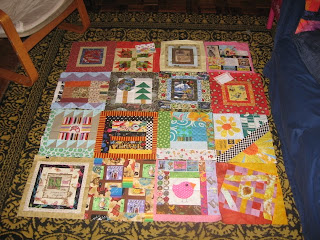 Another block for the Around the World Quilt Bee - this one is for Courtney, who asked us for blocks which tell her something about us, whether it be a geographical representation, a theme significant to us, fabric we like, favourite colours, etc. She placed no restrictions on the fabrics, colours or block choice, so I have taken her at her word and gone a little wild. I think mine is the only block not to use commercial fabric, but there's a lot of variety, so I don't think it will be out of place. I started with a variation on the London Roads block, then did some curvy slice and dice with it to insert the strips, and then put some borders on it, turned it askew and cut to size (12x13"). I figure this block says a lot about me. I am attracted to traditional quilting (London Roads block) but can almost never make a block as written (the variation thereon); I like artier quilty things (the slice and dice & turning it on its side) and am not afraid of harder techniques (curved piecing, etc). I am very organised but trying to be more free creatively, so while I planned the starting block of this and pieced it fairly accurately, after that, I just made it up as I went along. I've used my own hand-dyes, in some of my favourite colours. And of course, I chose London Roads as a starting point for fairly obvious reasons!
Posted by Kate North at 11:43 pm

Labels: around the world quilting bee

A great block Kate - and it says so much about you. I really like the colors you chose.

that is a lovely block, i will have to get my thinking cap on for when its my turn!!!

This block is just wonderful! I love reading your blog entry -- you completely embraced what I wanted for my quilt! Thanks so much :-)
... Courtney

it is a lovley block, the fabrics are beautiful!

Great block and a wonderful explanation of it