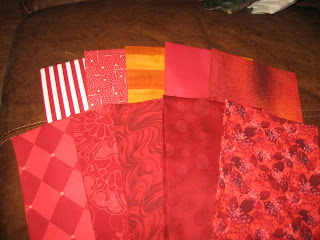 Well, I haven't even tried to sew anything in days, between the redecorating of the girls' room (one more wall - well, one wall and a corner - to go), my machine being in for a service/repair, being called in to work yesterday, tomorrow and Monday and a minor oral surgery today (I had an apiectomy - I won't go into details because I know a lot of people are squeamish about these things, though I've provided a link for those who aren't (though I will say, as mine was done in the Maxillofacial unit at the hospital, it was free) - it didn't hurt during the surgery itself, but the side of my mouth is really sore now - not where they did the actual surgery, but because of bruising to the cheek and upper gum caused by the retractor used. And I look like someone punched me in the cheek!) I haven't had much time to sew.

However. I do have my machine back now (ransomed collected it today, yippee!) and I got some lovely red fabric in the post (which I am itching to do something with - once I get some free time) and also, I will be going to the Knit and Stitch Show at Ally Pally (Alexandra Palace) on Saturday with DD2. Perhaps, just perhaps, on Sunday I will get a little time to sew.
Posted by Kate North at 11:05 pm

Labels: look what i got

I haven't looked at the link yet, but doesn't "api" refer to bees? You had bees removed from your mouth? No wonder it hurts! (Hope it feels better soon...)

Hope you are feeling much better soon. I don't think anything hurts more than having your mouth worked on! You need some sewing time for therapy!

Apiectomy? Oh FUN. (he shakes his head and moans)
I hope it gives you some relief.

Oh poor you. I hope you are starting to feel more yourself now and you enjoy yourself at Ally Pally.
Love the fabric you've had

I don't know what the procedure is either, although I think you may have told me in last week's phone call. Anyway, I hope you are feeling better soon. I've always found that the silver lining to having nasty dental work done is that I don't feel like eating when my mouth is sore, so perhaps I lose some weight!!LOL

Hope you are feeling better. Love the material you received. Good luck in getting back to sewing. Hope it works out for you.

Oooh, poor you - hope you are feeling better now.

Mmm, Nice fabric, boy, I'll bet you are glad to get your machine back. Think of a service as money well spent.