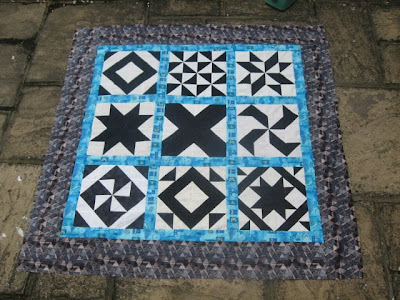 A long time ago - we won't say how long ago, as that would be embarrassing - I hosted a swap on the scrapquilting forum on Delphi, wherein we swapped 12" blocks composed of HST units only. We each picked our accent colour (a cream background being a given) and I chose black or BOB or mainly black. I received somewhere 20 blocks for this swap. Four of them, I gave away a while back (apparently, in April 2008 - where does the time go?) so that I could make a quilt with the remaining 16. Well, today I got them out and looked at them and decided that I didn't like the way they looked without sashing (you can see them all together in the linked post above) so decided to sash them with something bright, to give them some zing.

The problem there was, once sashed, we were looking at a really big quilt. Also, I didn't have enough of any fabric I liked with the black and white HST blocks to sash them without buying more fabric (and while I'm not opposed to buying fabric in principal, at the moment, I'm trying to make do from stash). So I decided to reduce the number yet again, down to nine. I chose the nine which worked best together, leaving out 6 which had black fabric with bits of other colours in (as opposed to being strictly black or black on black) and one which had a much more creamy background than the others (ironically, the block I made myself for the swap).

Of course, halfway through assembling the blocks with the blue sashing, I discovered that one of them was actually half an inch smaller than the others, so it came out and in went the block I'd made (actually, I'm glad to have that one in, so it all worked out for the best, lol) - as you can see in the photo above the difference in the cream fabric is not really that dramatic - can you spot which block it is?* Some of the blocks above look better in person, for instance the centre block has two different BOBs in it, and that actually shows in person.

The remaining 7 blocks I will use as part of the backing for the quilt - nothing wasted that way. And actually, I really like all of them, so I'll be glad to have them in the quilt rather than given away somewhere else. I can even use the one that's slightly too small (which is a Broken Dishes block, a pattern I love) if I'm not trying to line it up with sashing!

The border is a black and grey print with triangles on it - very suitable, I thought. I had hoped to be able to mitre the corners, but didn't have quite enough fabric - even with a regular border, I only had a 2x6.5" inch rectangle of the fabric left - and a 2" WOF strip from the original cutting. Oh and I should say that the fabric used for the sashing is a leftover from a commissioned quilt I made earlier in the year - there is still a little leftover, but not even enough for binding, I think, so I feel good about using that up as well.

On the whole, I'm very happy with this - I like the way it looks and it used several things which have been hanging about. It won't get quilted any time too soon as I don't have any spare batting at the moment, and am not going to buy any for a little while, unless there is something I specifically need to quilt for a reason. I have some small scraps, so can take care of little things without more batting. I will probably buy some at Farnham Maltings quilt sale in January as they usually have some good deals there.

I did actually do several other things today (though it's amazing how much time it took to work out what to do with these blocks) - I finished the 9 blocks for the November block lotto (these I can't show until November - which at least gives me something to show the week we go back to school and I have no more sewing time) and made a binding for the log cabin Christmas tree mini. Tomorrow I will attach the binding so it can get sewn down in the evening and then that's another thing I can tick off my list - in fact, it can go in the post with the rest of the goodies for that swap and I can consider that obligation fulfilled!

The blue sashing looks great with these blocks!

I love what you did with your blocks. The addition of color in the sashing absolutely makes them SING. What an inspired idea!

Everything thing you do comes out amazing! I think I may be jealous:)