What day is it again? 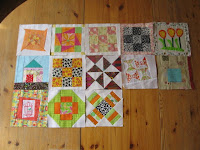 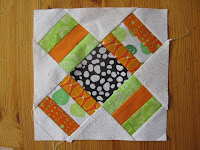 I didn't do much sewing today, as I was feeling lazy - about sewing anyway. Alex and I had a nice walk to the B&Q to look for a replacement lightbulb for the one in the fridge and then to Tesco to pick up a few things to eat. I kept forgetting whether it was Monday or Tuesday - summer holidays do that to me, I guess. When I got back I decided to tackle Nann's block for the Around the World Quilt Swap - here's my block and all the blocks together. This block was paper-pieced as the finished size needed to be 7". I did also start quilting the Japanese Taupe dresser runner - didn't quilt a lot of it, but at least I made a start. I'll save that photo for later in the week, when either it will be finished or I'll need to show something because I've not done any work at all - like Thursday, when we have planned a trip to Legoland.

I also spent some time re-planning the log cabin Christmas tree mini quilt - obviously this is just a rough plan as the fabrics I use will depend on what I find at the LQS, but I think the lighter colours will work much better. I had considered the light blue previously, but it was Margaret's comment about white as a snow background which really clicked - thanks Margaret! 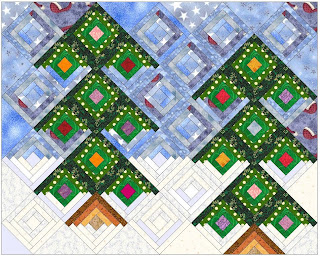 Now, that screams winter to me!!
maybe some sparklies in the white too :-)

Summer holidays - I wish - I am still suffering through winter. Aside from the weather, your work is beautiful, & it looks like enough work to me anyway

I LOVE this quilt. Would you ever share the pattern??