Sunday in the country 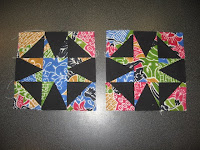 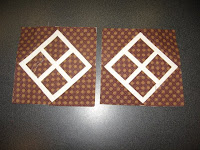 A couple of pairs of blocks today - both 6" blocks - the first pair is for my African block exchange with Karol-Ann - if you are thinking you haven't seen any of those in ages, that's because we stopped when she went to South Africa for several months. We agreed on a slow start back to the swap as we are both really busy. We were previously making 12" blocks, but both of us have quite a few of those now, so we decided to change to 6" for a while, to give ourselves some setting options for making actual quilts from the blocks.

The second pair are Dear Jane blocks - this is J2, Picture Perfect. For those who are new here, this is another private one-on-one swap - this one with Cathi. We are swapping DJ blocks in certain fabrics (we both have the basic fabrics) at 6". Eventually I will make a small quilt or wallhanging from them. We are NOT going to do all the blocks in the DJ quilt, LOL. At the moment, she does mostly the curved ones which she pieces with a freezer paper technique and I am doing the ones which can be easily rotary cut or (as in this case) paper pieced.

That was the extent of my work today, as we decided to take a trip out in the lovely summery day to Parham House in West Sussex - I had a family ticket from the school fair. It's a lovely Elizabethan House with a nice garden, and in another instance of serendipity, they have a huge collection of needlework and tapestries. No photos allowed in the house, but I did buy a few postcards (most of the needlework I liked best, they didn't have cards of, of course) - if you live nearby and enjoy needlework, it's definitely worth a visit as there is all sorts, including some impressive stumpwork, some of the smallest petit point embroidery I've ever seen, some amazing 16th century tapestries which look like they could have been designed in the (19)70's and an absolutely beautiful 18th century embroidered Mexican shawl.

Here are a couple of the postcards - on the left a late 18th century silkwork rabbit, on the right a Tudor christening cushion - the petit point here is tiny - the guide in the room said 32 stitches to the inch - I believe it. It was rather astonishing. 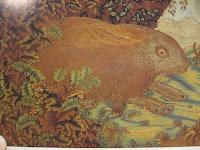 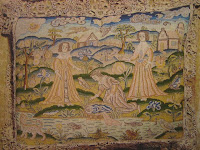 Ooh, ooh, I like! I shall hound the postman LOL

Anonymous said...
This comment has been removed by a blog administrator.
5:08 am