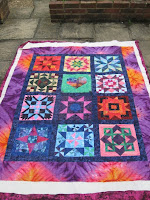 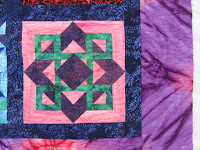 So, apparently, in the mathematics of family life, tennis camp + new computer game = sewing time for mummy. Olivia started her week (M-Th) at tennis camp (10am-3pm) today, had a nice time apparently - came away chatting animatedly with another girl her age ("Her name is Georgia; she's a really good singer; can we get a Michael Jackson album?") and claims to have enjoyed herself. The other two spent a large chunk of the day playing on the computer - but as I wanted to do some quilting and as they were working as a team rather than arguing, I let them.

Consequently, I have quilted the quilt I pinned together on Sunday. Admittedly, I chose a simple quilting pattern (what I call a flame meander, which is essentially slightly flame-shaped wavy lines), so it was fairly quick to do - probably took about 3 hours total, though it's hard to tell as I always take frequent breaks for other stuff to make sure my back isn't killing me at the end of the process. In the end, I went with not a purple thread, but a dark reddish colour. This was, I admit, entirely due to what I happened to have in stock, but it looks nice, which is what counts.

Tomorrow I think we will be out for the day, but the next time I have some free sewing time, I think I need to get binding on this and the rainbow mini quilt - and then I really need to bind some of the things sitting in my binding pile - it will be up to at least 4, counting these two, possibly five. Yikes!
Posted by Kate North at 7:12 pm

Love the colours thai are in this. Very interesting and wonderful blog. Enjoyed visiting.

Love the colours, purple is one of my colours, so have used it a lot during my many years of sewing. You have some beautiful work shown, and a lot of interesting stuff. I look forward to many more adventures through your blog

very pretty. I love the border fabric. I just love it when the kids work together every once in awhile.

Anonymous said...
This comment has been removed by a blog administrator.
5:08 am