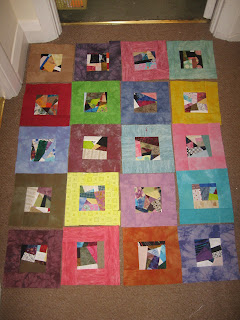 Today I decided that I would do something with some of the little scrappy blocks I'd made so many of - I have plans (nebulous plans!) for a variety of different kinds of uses for them. I think they are a bit busy when set right up against one another, so I decided that I would frame them in solid(ish) fabrics to define them better and flesh out a larger quilt top from a handful of small blocks.

I also used this chance to begin to straighten out one of my baskets of hand-dyed fabrics. I have two - one is for fabrics that are multicoloured or use various techniques which make the fabric not (essentially) a single colour - stamping, overdyeing, sunprinting with lots of resists, shibori, ice-dyes, parfaits, complex cloths. The other is for the ones which are more or less one colour (many handdyes have a lot of variety in the depth of cover of colous - it's one of the things I like about them).

Anyway. I do have quite a few pieces of hand-dyes - I used to dye quite a bit myself, though not so much any more. And there are lots of smallish scraps - maybe 10" square or thereabouts - which can be hard to use as they aren't really enough to do a lot of things with (when I was making my canal houses recently I did use a number of large scraps as well, which was nice). So I began to sort the basket out a bit - larger pieces (Fat 1/8 and up) could be ironed and folded back into the basket (it's a large, rectangular basket) and smaller scraps could go in a neat pile for use in small projects or as ATC backs, while the medium scraps were cut into 2.5" strips and used to frame 20 of the 4" scrappy blocks.

I think it's worked fairly well! 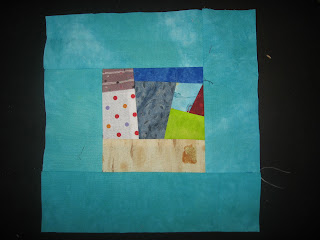 I also worked on something else, a piece for the BQL Skinny Challenge, which I'll show later, perhaps tomorrow, which means there are now quite a few more small scraps in my scrap basket (check out "state of the scrap basket", in my sidebar, if interested). I also remembered that I have two (much smaller) baskets of other small scraps - a basket of hand-dyed scraps and a basket of batik scraps. I guess they need to go on the list for being used up in some way! And my bin of strips is getting very full - I'm hope my scraps guru offers some project ideas for strips (other than a standard strippy scrap block) this year - otherwise I'll have to come up with something myself and that's a lot like hard work!
Posted by Kate North at 11:45 pm

Those look great, Kate! I almost started making some of these yesterday, but got pulled away by another project. Someday soon!!!

What a great way to use crumb blocks. I agree that they can get to be a bit much when not given a little room to breath. If nothing else all the seams start to fight. More ideas for strips are on the way, no need to worry. Your status of the scrap basket on the side is fabulous -- I love it.

I like this a lot. I like to do scrappy blocks but i haven't put them together since they are so busy. This is a great solution to the problem. Thanks

I like the scrap blocks even more now! Will definitely have to make some in the future.