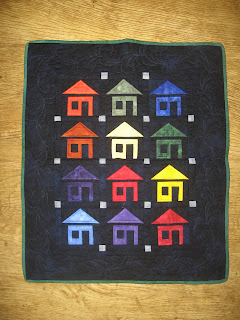 Among the nice things I've had in the post this week (there are a number of them - more to be shown at some point!) was this lovely mini quilt, from Sophie. Quite a long time ago, Sophie was in one of my little quilt swaps (perhaps the first one) and was due to make a quilt for me, but then life got in the way - and during her big move from Michigan to Texas, the quilt got lost - she thought for good. Luckily, it came to light again while she was looking for something different she thought had been lost in her more recent move (within Texas) - and she finished it off and sent it along... Isn't it great? The little houses are 3" blocks, and they sit in a very dark blue background - I originally thought it was black, but it's not.

Anyway, I'm delighted she found it - partly because of course it's incredibly annoying to lose things - but mainly because I love it!
Posted by Kate North at 11:32 pm

Labels: look what i got, mini quilts

very nice! that was one of my favorite blocks from the lotto and I love the mini version.

its awesome...im glad she finally found it and that is happily in your home! very pretty!

WOW - great story! Nice when something that has been missing comes to the surface...kinda makes you appreciate it more.

How wonderful that the lost is found! It's wonderful!