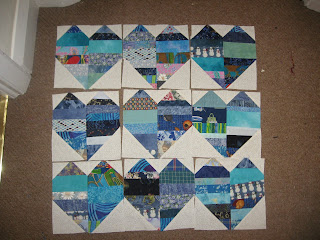 Finished up all the hearts I had prepared from last weekend today, and even remembered to take some photos as I went along so I can do a mini-tutorial sometime soon on how to do them, if you should so wish.

Someone last week suggested that the offcut triangle squares looked like good churn dash starters - I've taken that idea and run (not quite in a straight line) with it - and made some shoo-fly blocks with them. Ten heart blocks yeilds five shoo-flies, but there will be more hearts in other colours, so more shoo-flies later this year. And the amazing thing is, I don't think I added anything to the scrap basket at all... Oh wait, I'm wrong - one cream square which I cut the wrong size... 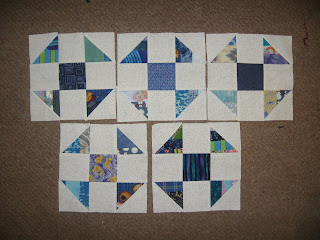 I also did some quilting - a few ATCs with some threadplay, and then I quilted a couple of small pieces for upcoming challenges and swaps - yes, I'm being vague, you'll see them in time, I promise.

Thanks for the various comments about my thoughts on my blog - I have decided that for the time being, I will keep the two separate - I think if I were starting again, I would just make one blog and that would be that, but they've been separate for so long it seems weird to join them. (The family blog is older than Alex!) Also, I am trying to write more often in both places (especially here), so I don't want to get TOO many posts. The family blog doesn't get updated nearly as often, it's true, but that's partly because I don't take as many photos now that the kids are older, and partly because this year I've been doing the 365 project, so some of the photos I take around the house, etc go there instead.

I decided I would link the two a bit, though, so I have put a feed from my family blog in the sidebar on this blog for anyone who wants to see what we're up to. I couldn't make it put a photo and a couple of lines of text, but at least you can see when it's been updated, if you are interested in that aspect of my life.

I also gave this blog a title (though not URL) change (I did think about changing the URL, but it seemed like too much hard work - actually changing the title is simple, if you can think of a new one not taken, but all the associated palaver...) and revamped it for the season. And you can expect to see a bit more of other stuff besides just sewing (though I will keep it art & craft related, mostly) here in future. I think that will hold me for the time being!
Posted by Kate North at 11:47 pm

I like the new look -- but I was a bit taken aback at first. Wait, who's blog IS this?

What great heart blocks. I would love to see some of the photos in progress as I have been collecting heart ideas for February. I love the fact that you took the bonus blocks and turned them into yet more blocks. So glad I'm not the only one who can't let anything go to waste.

Love the heart blocks and the churn dashes. Have you said how big the blocks are?

I really like the hearts and what a great scrap busting idea - churn dashes out of those scraps.

The heart blocks are fab and I really love the churn dash...isn't it nice when your sewing gives you a two for one special!

Love the heart blocks! Would appreciate the tutorial - would be great for Valentines