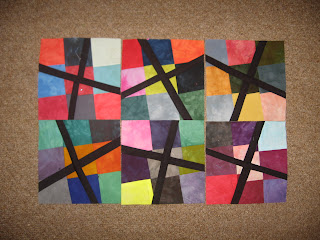 So, here's what I have at the end of today's sewing time (that, and 6 more of the batik boxed in blocks I did yesterday - will show those again once I've got all 12 sewn together into a top) - but first, here's a little background (I just wanted this photo at the top because it's pretty!)... 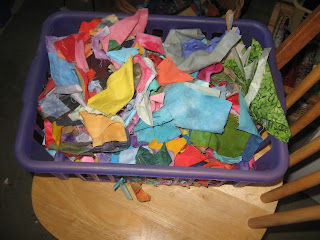 Still making my way through various scrap baskets - having cleared the batik scrap basket, it was time to tackle the hand-dyed fabric scrap basket (and yes, the odd bit of green batik does seem to have snuck in there as well, hmm). Or rather, scrap baskets, as there is this one as well: 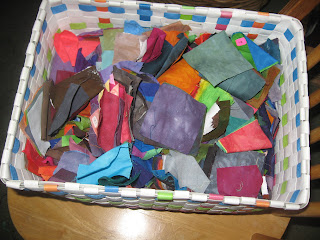 The top on is miscellaneous scraps of assorted sizes and shapes. The bottom one is actually all 2.5" squares, though they don't look it as they are rather higgeldy piggeldy. Most of the squares are from the days when I used to do and swap a lot of colour runs and gradations with my dyeing group. They used to be filed carefully away with the dye names, etc, but honestly, I never really looked at them and decided they'd do better as scraps. Of course, then they sat in a basket for ages! I decided I'd try to do something with the squares and get the other basket sorted out into strips, larger scraps and general scraps for the main scrap basket.

I didn't get anywhere near emptying the squares basket, but it's a heckuva lot neater than it was: 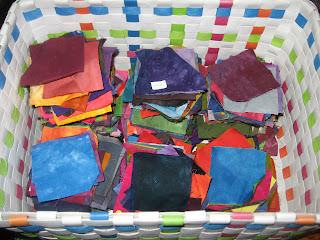 And the other one, is empty. Hoorah! Or course, the scrap basket is more full than it was yesterday... 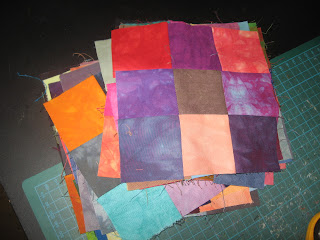 What I did with the hand-dye squares was to make a load of random 9 patches (I have made 30 so far - might make more, not sure) - and then slice them and insert black crosses, like in the top photo (only 6 have the crosses done so far - the others are still in 9 patch state). This works well because the colours look good together, but also because it's quite casual - you don't have to be 100 per cent accurate with seam matching, because you are going to slice them apart and join them in a slightly wonky way later anyway. Which meant that I didn't have to re-measure every 2.5" square to make sure it really was 2.5" - the ones which were obviously a lot bigger or smaller I either trimmed or put in the scrap basket.

What I have to decide now is whether I want to use these blocks joined up together like in the top photo, which is a pretty fun look (and if I do, I think I will want more blocks as they will finish at 5") or whether I want to sash them with some black (in which case 30 will probably be enough for a small quilt). I think both options have their merits. Of course, the number of squares I have, I could easily do both options, except for getting totally bored of that block well before I finished the projects! 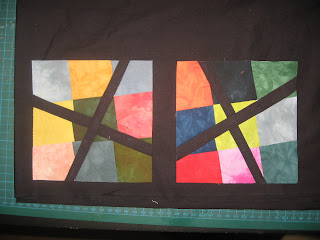 Those blocks are really neat, Kate! It's amazing how slicing something up can totally change it!

They look great. I like the 'window' look of the bottom sashed ones.

These have a really fun and funky look, I like them.

You do have a lot of scraps. I do like your new blocks.

Oops. I'm the one that sent you the sashed file. I didn't see that you'd already tried it out. sheepish grin