Quilting in the old year...and the new

At the start of the New Year, a lot of people are looking back at what they acheived in the previous year and making plans for the next year. I try not to make my plans too specific, especially now that I am working full time again and don't have nearly so much time for sewing, but it's nice to at least do a re-cap of a bit of the stuff one has accomplished, and look forward to the next year as well. Especially if you don't commit yourself specifically to too many tricky projects!

So, first things first - a recap of the quilts I finished this year... 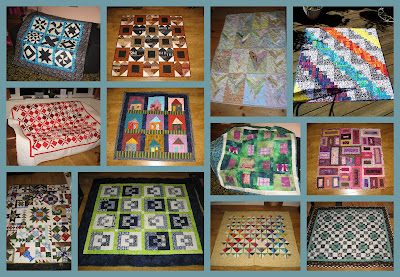 I also made a load of quilt tops for charity (and a few to tuck away for future use, though not many of those). If you want to see those, you can look under the Project Linus tab at the top.

In the new year, I hope to get some more quilts longarm quilted (actually, there's one with the longarmer at the moment) though I'm not sure if I'll have so many specific occasions for the quilts - maybe just a few to keep and a few to put away as spares...  I do have one baby quilt that I know of coming up - and I'm sure there will be more, as there usually are (though last year was a lot less full of babies than the year before). I've offered a small quilt to the Scouts for fundraising as well, so if they want that one, that will be another baby quilt to make.   Or rather, to quilt up from the stash of tops I have tucked away!

And as for personal quilting goals - well, I'm not really making any, though I want to make a quilt for my own quilt swap (Another Little Quilt Swap 8) and take part in Julie's round robin (Cotton Robin). I also want to follow along with the Rainbow Scrap Challenge 2014 - although if there's a month where I don't have a lot of scraps in that colour, I'll probably skip it. I don't have specific plans for how I'm going to play along with that - will probably let the colour choice dictate the type of project, though I'd guess that lots of them are going to be tops for Linus Quilts. This will simply be part of my ongoing project to use up scraps and other unwanted smaller pieces of fabric - a little direction, perhaps, as to how I want to do it. Although it won't stop me from doing something else if I feel like it!

And, as I usually do, I want to take part in the Block Lotto as many months as I am able to - this year, Sophie promises that the blocks will be largely geometric, which is something I love, so I'm guessing there won't be too many months I want to skip (in fact, I have already made blocks for January, which I will show tomorrow!)

I like the new year's idea for goals. I'm looking forward to the ALQS8.

Oh wow, look at all those finished lovelies. I'm not setting too many crafting goals this year either. I generally set myself a tonne and then hardly achieve any so am just going to go with the flow this year