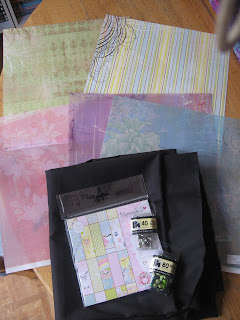 After a nice, leisurely start to the morning (I didn't get up that late, but I did spend a lot of time doing nothing, which was lovely), Alex and I had a trip to New Malden to do a few errands - Sarah not being home from her sleepover yet and Olivia choosing to stay home and sleep and/or use computer while still in pyjamas - and one of them was popping into our little local department store which has a Tardis* type haberdashery department. They don't have much fabric, but they do have what I needed, which was a couple of metres of black cotton - I am totally out of black, except scraps, and I use it in a lot of things, so I like to keep it on hand. It's not quite as nice quality as some quilting cotton, but it is 100 per cent cotton, it's less than 2 miles from my house, and it's £3/metre. 'Nuff said. Of course, in true Kate fashion, I have gone in for 2 metres of black cotton and come out with 2 metres of black cotton, 5 sheets of velum & other fancy paper, a small pack of designer paper, and two packs of brads (which were on sale). 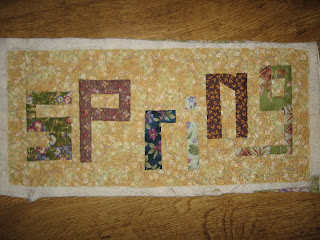 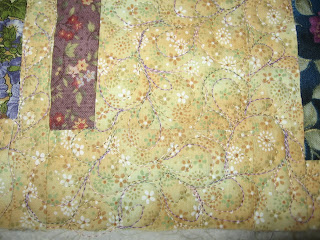 After the errands I did come home and do some sewing (well, technically, I had lunch first, but whose counting). I put a binding on a little art quilt which I'll show later, once the binding is sewn down and then decided to work on something for a spring themed swap I am in.

This piece is another excellent example of one of the reasons I follow along with Sophie's Block Lotto - yes, it's fun to have the chance to win a lot of blocks with only making a few, but another great thing I often get from it is exposure to blocks I'd not normally make - or in this case, techniques I haven't tried before. The February lotto uses pieced words a la Tonya of Lazy Gal Quilting, and I'd never tried them before, although I've seen them lots of times. I made a few with a Valentine theme in anticipation of the lotto, which gave me a bit of a feel for the technique. So, when it came time to do a spring themed whatever, it suddenly occurred to me that I could piece the word "spring" as a starting point. Before I had done those blocks, I probably wouldn't have thought of it. And even if I had thought of it, I probably wouldn't have done it as it would have meant taking time to learn the technique and today I just wanted to get right into what I was doing.

So, anyway, I have pieced "spring" in different florals on a neutral floral background and then quilted in my favourite (for small pieces - this one is 10x22") clamshell quilting with a variegated thread. I have plans to embellish the piece with flower faces (not the big fat felt ones, though, as they are the wrong colourway) - more on this soon, I hope.

*For those who may not follow Dr Who and hence not have a clue what a Tardis is, the important characteristic is that it's much bigger on the inside than it is on the outside.
Posted by Kate North at 10:58 pm

Labels: block lotto, look what i got, mini quilts

"Spring" is very pretty. We are much in need of some here!Glad you explained about the shop I'd never figured that one out!

Wow - Tonya's letters! Are we going to see some more?

Nice block. I like the spring fabrics, especially, because we need some spring here! Yesterday's snow melted as it fell, but we still have huge piles of snow, everywhere.