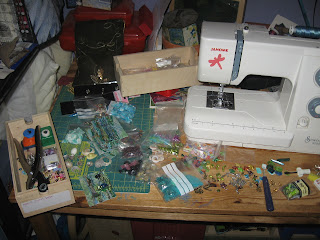 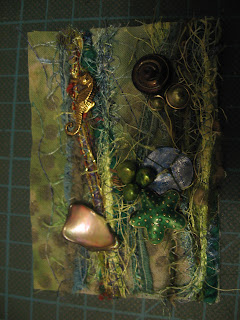 At the moment, my sewing table looks so chaotic, I thought I really must show a photo of it - it's normally much neater than this (on this side of the machine, at least) but today I finished the backgrounds I started working on yesterday and got out lots of bits and pieces which I thought might suit an ocean theme for the cards. There were a lot of them. But it's much easier to work (I find) with everything that you might possibly want right there in front of you, so I tend to get out loads of stuff, and then rummage through it as I go. I made a prototype card - the photo on right is a little darker than the card is in reality, and has a shadow across it (trying to photograph at night is never a good idea) but you get the general idea. However, I don't have 8 of most of the things I used, so each card will be a bit different from the others, though they will have elements in common. I'm not sure how I will finish them yet, either - I think I may add a grommet and some trailing fibres as one detail - that's something that has to be done after the card is finished, though, so it can go through all the layers.
Posted by Kate North at 11:49 pm

That chaos looks wonderful! You just need a larger table :)