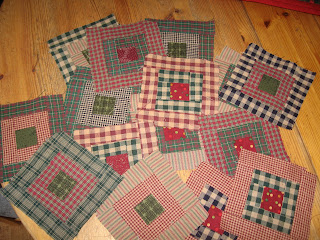 I didn't do much work on Monday, as we decided on an impromptu trip to Ikea - which, surprisingly, was nearly empty. That was great, as it meant that instead of a brief, frantic look at desks for the girls' room, we were able to spend a while looking at them and chairs, and actually buying one (and a chair) to take home. And put together - but no sewing. On the other hand, I did have Swedish meatballs for lunch, so who can complain?

Anyway, this sewing lack was compensated for yesterday and today, when I was actually able to do some more blocks for the homespun tree skirt. It may not look like a lot of blocks, but in addition to sewing this handful, I did manage to cut all the pieces for all the rest of the blocks - which is a LOT of cutting! I decided in the end to go ahead and incorporate the two black homespun pieces, partly because I like them, and partly because I didn't have quite enough fabric without them. I think it will work nicely, though.

Not sure I will have much to show over the next few days - think I might be busy with other things, especially on Friday! - but I hope to post again before long. In the meantime, happy Christmas (or whatever holiday you might celebrate) to you all!
Posted by Kate North at 11:16 pm

Merry Christmas to you too Kate!! Hope you have a wonderful time with the kids!!

You're making great progress. Merry Christmas to you.