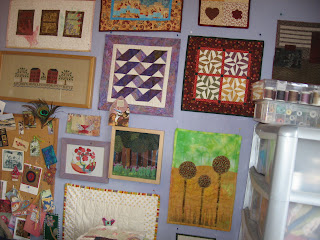 About once a year I have a big clear out of my sewing room - it's partly because it just gets really dusty (there's so much stuff in it that it's hard to keep the dust out), partly because after a while stuff tends to get piled up or stuffed in drawers rather than put away properly, and partly because sometimes I just like a change - though with the amount of furniture I have and the shape and size of the room, change is limited. I don't really plan when I am going to do it, I just get to a point where I can't stand it any longer, and then, I have to... In last year's reorganisation, I tried my plastic drawers behind the door and that annoyed me all year long (door didn't open wide enough) so I knew I had to at least change that! 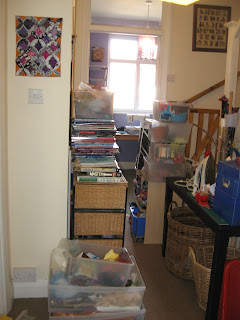 Anyway. The process pretty much takes the entire day and I have all the stuff in the sewing room spread out in the upstairs hallway and on every surface in our bedroom... 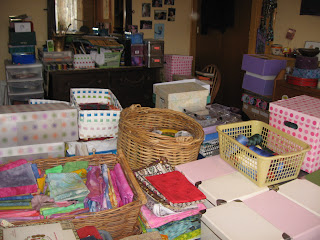 I manage to fit an amazing amount of stuff into my sewing room, which is the "box room" of the house - it's smaller than 2.5mx2.5m - not sure how big without measuring it, but definitely not 2.5m in either direction. 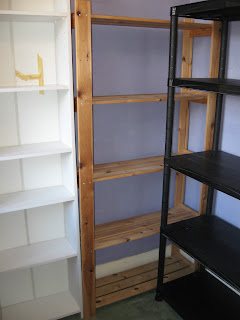 Here are some of the shelves before I put the stuff back on them. There's another wooden shelf to the left of the white bookcase - you can see it in the photo below. To the left of the window, the unit which looks like shelves is actually plastic drawers - at the moment, the drawers are out of the unit. 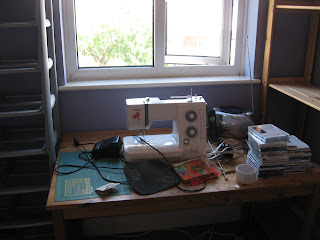 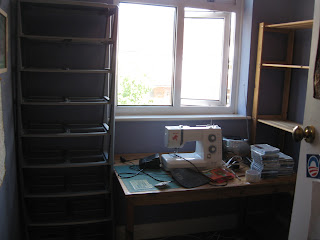 And here we are, late in the afternoon, when things are back on the shelves. Everything is put away except the stuff in the blue plastic basket next to the sewing machine, which is lots of bits and pieces which have to be put back in the right drawer, etc. That's the boring part! 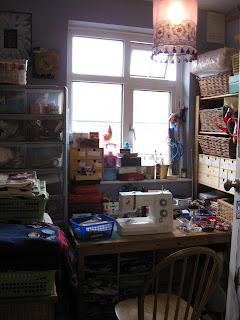 The room's not actually big enough to get back far enough to photograph the whole wall, but here's the corner you saw before, in the empty shelf photo, 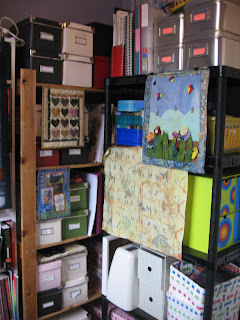 and here's part of the bookcase & other shelf. As you can see, I do make very good use of the space, and do manage to have enough space to do most of my work in the room - except if I have to quilt anything which is larger than a small baby quilt - in those instances, I take the sewing machine down to the dining room table... 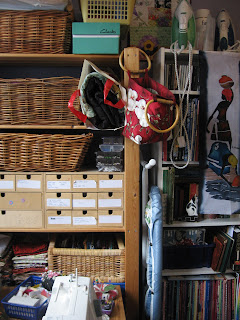 Oh my! I think you have much more in your space than I do in mine! It must be really organized as you always get so much accomplished.

I love the wall of quilts!!!! I so need to clean my room again to find all the things I have lost. SIGH!!!

Congrats on getting it all sorted in a DAY ...I'm so impressed.

It's good to have a clear out from time to time...I just got rid of a bunch of magazines, but fabric is much harder to part with.

For years I complained bout British box rooms - so unfair for the child with the short straw (me as a kid!) but once we added another bedroom so the girls had one each... And the box room became my sewing room I cameto see it as a brilliant idea! Mine's about as packed as yours, but needs the clear out!

You certainly do cram a lot into a little space!

I try to clean up as I go but sometimes I just have to stop and sort it out or it drives me mad!

Did you see some of your scraps in use on my blog post today?

An amazing use of space.

Gosh, it's a very similar set up to mine, EXCEPT yours is tidy now. I don't think I could ever get a full day to do it, but I do agree that taking everything out first would be the only way to do it properly!!

The only way to get rid of the dust! Well done on achieving the mammoth task in one day.