A bit of this and that 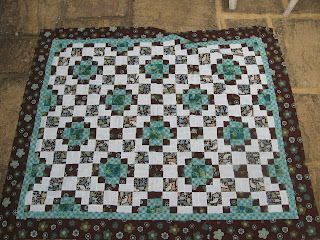 Among the things I did today was to add a couple of borders to the blue and brown quilt - I couldn't add a border of the other brown fabric (with the cats) as I didn't have enough of it left, but there was plenty of this one. There is still loads of the blue as well, so it's possible I will use it for a backing, when I get to that point. Not sure there's actually enough for a backing, but with a little creative piecing, I'm sure I can get around that.

I also added another row to the Hawaiian shirt top - definitely better now: 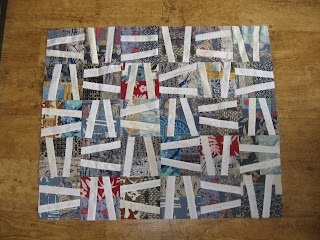 And I attached the other two bits of binding from yesterday - which means I now have 4 quilts of varying sizes waiting to be bound. I would have five, but I finished the little Japanese taupe one tonight - I'll show it later in the week as I haven't taken a photo of it yet and it's too dark now.

Tomorrow I am going to the airport to collect my mother for a visit, so I imagine my quilting time in the upcoming days will be less than at present, but hopefully I'll still get a few bits and pieces in!
Posted by Kate North at 11:09 pm

What about using the cat fabric and the brown for the back?
You have been busy... it's nice to see someone is accomplishing a lot this summer! Thanks for letting me live vicariously!
Enjoy your visit with your mom.

They're both beautiful, Kate! Love the Hawaiian shirt quilt....

Have a wonderful time with your mum.

ditto Lynne. I typed exactly that and then read hers. ha ha

Just catching up on my blog reading. the shirt quilt looks great with the extra row. Hope you are having a great time with your Mum :0)