(Much) More on the block lotto 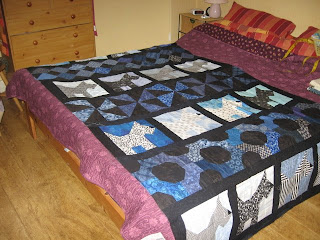 OK, so here's a bit more about my winnings in the Block Lotto over the years I've been playing. I mentioned yesterday the Scottie Dog quilt, which I do intend to someday give to my eldest daughter. But like so many of my tops, it has to be quilted and I don't really want to do it. And I can't afford to have all my large tops longarmed in one go. It will get there eventually. (It occurs to me, looking at this photo, that I have actually put another black border down the sides of the quilt after this photo was taken, for what it's worth!) 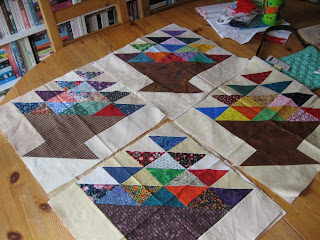 These are 4 of the 13, 16" basket blocks I won in May 2007. Of these, I have one still waiting to be turned into a mini quilt for myself (you can see it in my quilt tops page at the top of the blog), I turned at least two into mini quilts for various purposes (here's one, which apparently was made by my friend Julie, according to my blog of the time; here's another, which was given away on my blog for some sort of blogversary; apparently in Dec 2008 I sent the remaining 9 blocks to Ann in France in exchange for a mini quilt she made me - which means that I did do something with one other of the blocks - I have a feeling it was an angel quilt for one of the 4 seasons swaps or something like that - ok, some obsessive blog searching has found it - it was a replacement in the Spring swap.) 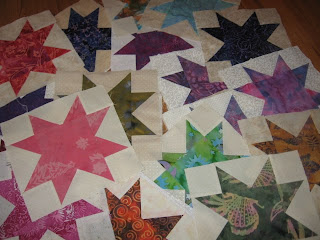 In October 2007, I won these batik stars. These I loved (still do) and eventually turned them into a tablecloth quilt. Only took me until January 2010, apparently. 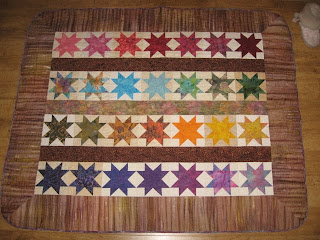 It doesn't get used all the time (though it's usually lying around somewhere near the dining room), but if you click the link above, you can see it actually on my dining room table. I was really pleased with these stars and the finished piece, so it's nice to be able to see them regularly. And if you're interested in how it's quilted, there's more about it here. 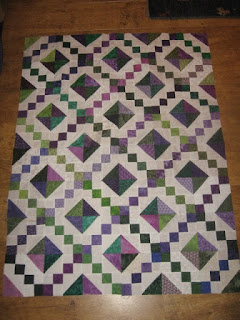 In May 2008, I won some purple and green buckeye beauty blocks, and these are now in my stash as a large baby quilt top. I'll quilt it when needed... 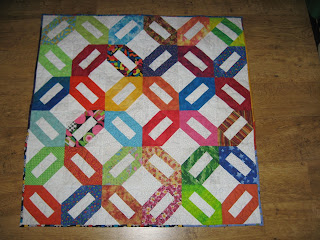 In September 2008, I won a bunch of bright cracker blocks. I used some of these in January 2009 to make a baby quilt for my nephew Kevin, who was born on Christmas Day 2008, so a pretty quick turnaround for them! There were more of them, but there were too many for baby quilt and unfortunately, some of them were too small to be used without cutting off the points, so I offered them in a giveaway and they went to live with one of the other winners of that month's lotto, who still hadn't used her blocks at that point.

And that was it, until last month (or rather, March), when I won the red and white blocks - and of course, this current win of April's Modern Clover blocks. I do actually have in my possession now all my red and white blocks, but I haven't had a chance to use them yet.

I know there seems a large gap between Sept 2008 and March 2011, but during a lot of those months, I donated my chances in the lotto - that is, although I made blocks, I asked to be left out of the draw - either because the blocks weren't quite my thing, or, more usually, because I honestly didn't need lots more blocks. There were a few months I would really have loved to win, but that's the way it goes. And one can always make more blocks! In fact, I've made several sets of blocks based on things we did in the lotto - such as the tic-tac-toe blocks (for the lotto, we did bright colours on a white background) or the little funky houses (for the lotto, we used a teal background and a bit of red somewhere in each block - for mine, I just grabbed whatever I fancied).

Sophie, the Supreme Goddess of the Block Lotto herself, left a comment yesterday that my winnings probably equal about half the total number of blocks I've made during my years in the lotto, which, you gotta admit, isn't bad at all.

But honestly, and I know I say this a lot, it's not all about winning for me (though winning is fun, to be sure) - the block lotto is a great way to use up scraps, to try out something you might not do otherwise and to learn about new techniques and blocks you are unfamiliar with. And for me, it lets me make a few blocks every month (which is one of my favourite things to do in terms of sewing) without feeling guilty about ever needing to turn them into a finished project - though of course, when you are lucky enough to win it's a different story!
Posted by Kate North at 9:45 pm

I agree with the idea that it's good to try out new blocks, (and it was great when I won!) my problem is that I usually use my fabrics unwashed, and am slowly building up a stash of washed fabrics for the lotto - so I am building a 2nd stash, not eating into the first LOL

Very interesting, it almost made me want to start doing the block lotto!

Wow! How lucky! Thanks for sharing the Block Lotto winnings with us. Awsome. Thank you also for donating lots of chances to us "newbies".

Great post and I agree. I am still very new to the Block Lotto and have won the third month that I participated. I was beyond thrilled and still am. I also don't like to pre wash but most of my older scraps have already been washed, so this keeps me from going out and purchasing new fabric. LOL.
Blondie

I love the basket blocks.

I did block lottos years ago when things like #quilttalk were around and they have made some of the nicest quilts because of the variations in colours and fabric choices. Thanks for the show 'n tell..It's love to see what you've made.

I just recently came across the Block Lotto site. I really like your post. It is fun to just make a couple blocks - no pressure. I suppose that would be one of the best reasons to join.

They are all so very different; my favourites are the Scotty dogs and the cracker quilt.