The evolution of scraps 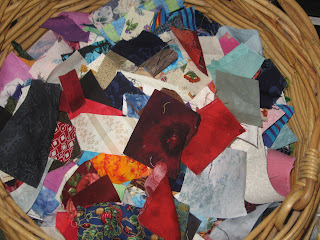 As those of you who hang out here regularly know, I've been trying to de-stash my scraps this year - and doing a fair job (though I swear those things breed when I'm out of the room) of it. The problem is, unless I do only things which are entirely scrap-based, new scraps pop up all the time. I was thinking about this recently, while making some scrap-based blocks - how things move from one stage of the scrap system (because I do have a system of sorts) and on to another... 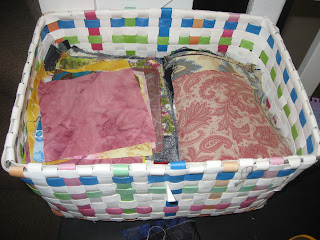 Here's where my biggest scraps are. If something is bigger than this, I don't consider it a scrap, I just put it away in my "small pieces of fabric" section, which is a series of Ikea CD file boxes, with fabrics sorted mostly by colour (or sometimes other criteria, like Civil War Repros or Stripes or Taupes) - those pieces are mostly 10x10" or larger. If something is smaller than that, but still good sized, it goes in this basket. I used to cut things into squares - 3", 3.5", 4" and so on, up to 5" (anything smaller going in the scrap basket) - but I am not doing that any more as I am trying to get rid of those squares, so the scraps just go in this basket. So, these scraps are in a variety of sizes, but nothing smaller than about 3x3 and nothing larger than about 10x10 - although sometimes I put pieces that are really awkward shapes in here, too. I don't get out the ruler, though, I just approximate. 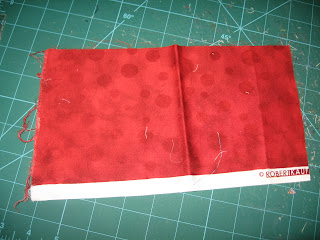 So, on this occasion, I was looking for larger scraps - 8x3" or bigger as I needed 8x3" rectangles. I grabbed this piece, which fit that criteria, and cut it to get my 8x3" rectangle. 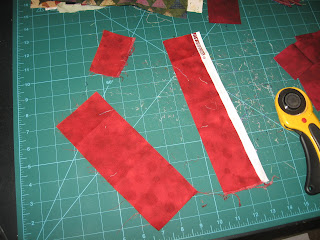 There it is, at the bottom left of the page. That left me with a long strip and a small cut off - the strip then went into my strip box (which is why that collection doesn't go away despite doing loads of string blocks this year!) and the small piece goes in the scrap basket.
The whole thing is a kind of trickle-down effect, and I suppose that eventually, provided that I stopped buying new fabric, I would run out of larger scraps, which in turn would mean I'd run out of smaller scraps. I don't see it happening, though - it would mean not buying new fabric!
That's ok, though, as the point isn't really to get rid of all my scraps - it's more to be sure to consistently do projects with scraps so that the number of scraps in my house at any one time is small and sensible, rather than overwhelming. This year I am making a particular push on scraps because it had got to the silly and overwhelming stage. Hopefully, by the end of the year, there will be far fewer scraps and they will be contained and organised a bit better so they are useful rather than annoying. 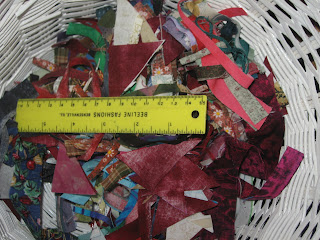 Oh, and I am not fanatical about saving scraps - some things do go in the bin - but they are fairly small, as you can see by the ruler (only there to give a size-guideline). I guess about the smallest thing I save is 1.5x2 or so - smaller than that, I can't be bothered (I do sometimes save little bits for school, but I just gave them a load, so I probably won't do that for a while).

Thanks for the description of how you save scraps. I spent a couple hours yesterday doing some sorting and figuring out the scrap system that will work best for how I sew. Your ideas help!

Sometimes though other people's scraps are more exciting than one's own as you do get bored of using the same fabrics in ever decreasing sizes over and over again...
Unless of course your scraps are all of fabrics that you just love anyway!

Yep, even as a novice, I can relate to that. I have smaller (than fat quarter) pieces of fabric (sorted by colour) and scraps. Anything narrower than 1 1/2 inches goes in the bin.

I can see how the scraps can get out of control though; I'm planning to use some of mine to make drawstring bags for charity.