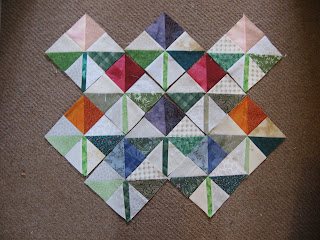 Some of you may remember these blocks from last month's block lotto - I blogged about them when I made them. Well, as it happens - I have won the lotto again - and will shortly start receiving in the post lots of these lovely modern clover blocks. (Which reminds me, I must mail mine out - as they were made in pairs, I'm only keeping half of the ones I made myself - perhaps tomorrow...)

Some people have remarked that I'm lucky to win two months running - which I am - but it got me wondering about how long I've been playing and how many times I've won, etc. So I did a little research - not hard given how organised Sophie keeps the Block Lotto website.

And I discovered the following statistics:

*My first month playing the Block Lotto was April 2006, when we made Johnny Round the Corner blocks.
*Since then, there have been 2 months when there was no block lotto held (Dec 2006 & Dec 2007)
*Which means that there have been a total of 60 block lotto months since I first started (counting the current month)
*Of these, I have enterred at least one block per month in all but three (July 2007, February 2009, December 2009) or possibly four (June 2009?) months. These months are mainly applique months. I can do applique, but it's not my favourite thing, so I often don't take part.
*I first won blocks in June 2006 (Scottie Dogs - before my quilt blog, though you can see them in the subsequent top - still a top! - here)
* Subsequent wins are:
Time is short at the moment, but tomorrow I will dig out the links to the other winnings and what I made or did with them.

What I don't have the stats for is how many months I "donated" my chances in the lotto - i.e. I made blocks but didn't enter the draw. Lately, there have been lots of those, though not so many in the start, so it's not really possible to work out my percentage of times won. But in a geeky stats sort of way, I enjoyed looking back on this...
Posted by Kate North at 4:34 pm

Glad to have inspired your geeky moment :) 60 months of block lotto wow!!

You made me look. You have had 384 chances in the Block Lotto since you made those first blocks. Remember that sometimes we count PAIRS instead of individual blocks, so the actual number of blocks is even more.

The number doesn't seem SO high when I think about how in winning 7 sets of blocks you probably have received at least half of those almost 400 blocks back ;-)

Those blocks are most inspiring. I love how the two tones of the one colour give a three dimensional effect and make the block positively undulate as you look at them.

Congratulations on your win.