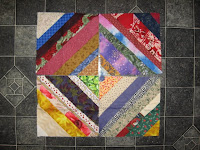 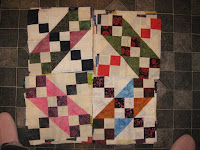 OK, once again I have had a really good clearout and found some blocks I am never going to do anything with and so I am going to offer them up to the highest bidder - not really. In reality, I am going to offer them to whoever wants them, with the caveat that I am going to ask to be reimbursed for postage. I don't want anything for the blocks themselves, just don't want to spend anything on sending them to you! And also, I'll try to spread them around a bit, so if you leave a comment be sure to specify which you want most...

1. Scrappy String Square blocks - 4 shown. There are 48 of them - 8 inch blocks. These are quite heavy as they are sewn onto foundation fabric. These are all, I think, from my own scraps, though I did swap some once, so it's possible some are from that.

3. Basket blocks. These are big - 14.5" I think. There are 9 of them. I won them in the block lotto on about.com and have used a number of them to make small quilts, but I'm not going to do any more!

4. 16 patches. These are 8 inch blocks leftover from a swap - I did use most of the blocks in a quilt top, but these I found later - they had been put aside somewhere else. I don't think I would have used them anyway - the top was big enough - but it's too late now! There are 21 of these. I know, it's an odd number! 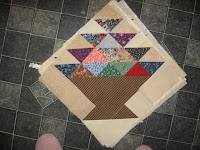 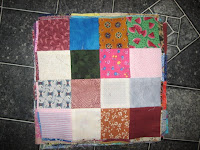 5. 2 lonely pineapples - these two blocks are extras from the pink and brown pineapple top I put together - I was unable to use them in the top and thought I'd offer them to anyone who could use them for something. I don't need postage back on these - in fact, I'll throw them in for free to someone who takes one of the other sets of blocks...
6. 7 6" friendship stars - these were sample blocks for a block lotto month which isn't going to happen. Not sure why there are only 7, not 8, but there are. I've looked, and there's definitely not another one. 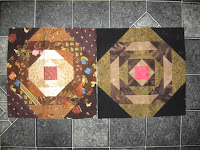 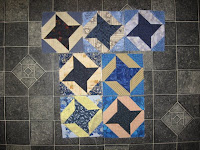 7. Paths and Stiles blocks in florals & white. These are 9 inch blocks - 6 pictured, there are 21 of them. These are in a variety of florals (no two the same) and a variety of white and WOW backgrounds. Another swap I'm never going to do anything with.
8. Bright cracker blocks - 6" blocks. There are 16 of these. I used some of these to make a baby quilt top; the others weren't quite the right size. And then 4 more arrived really late. I could, in theory, make another baby quilt, but frankly, I don't really like to do the same thing twice, so I thought someone might like them for PL or similar. 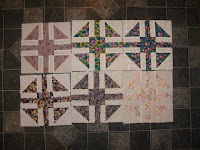 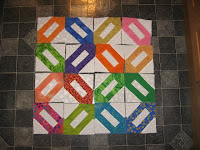 Frankly, I have no idea what the postage would be on any of these blocks - depends on which ones and where you are in the world, but I'm guessing it would range from a couple of quid to about £8 max (which would be something heavy sent internationally). Which is somewhere between $3 and $15.
Not sure when I'll choose who gets what - will depend on demand and my time (which is a bit thin on the ground at the moment) so I'd think a week or two. Which brings us to Christmas, doesn't it - well, I might get them sorted before Christmas, you never know!

Oh my goodness! I would like to throw my knitted, tassled hat into the ring for ANY of them!!! I especially love the pineapple, strings, cracker blocks, but really like all of them!!!

oh I love those blocks!! Especially the baskets! I would be so happy to adopt them and give them a happy home! :-)

Hi Kate - Would be prepared to offer a good home to either the Jacob's Ladder or the Basket blocks! (Payment in £'s nor Euros - thought I'd mention that!!) ..Luv AJ

hello Kate, I did the holly leaf in your ornamentswapbunch. Beate was so busy that she forgot to add me to the blog roll (I joinded as last member). I expained in my German-English blog why I did the holly leaf: www.scents-and-senses.blogspot.com Cheers from Southwest-Ireland! Eliane

Count me in also. I love them all, so any of them I would be tickled to death to have!

Oh and if you pick me I will pick up the shipping!!

I'd love the bright cracker blocks, but I'd want to be sure I could get the directions to make more to add to it as my littlest granddaughter would just LOVE this. How nice of you to give these things away. I need to go through my stuff and give some things away when I can find what needs GOING. (I've given lots of scraps and odd blocks to neighborhood quilting gals, so until now I've not collected a lot of unused bits and pieces.)

Pat in DE (a blogging friend of your mom's)

scrappy string squares would give a great background to play with embroidery on - when the broken bones heal of course ! no problem paying in serling :-)

Kate, don't know if I have any rogue pounds laying around to pay you with, but would you take dollars??? I love the batik jacob ladder blocks or the basket blocks or any others that don't go to a good home. Perhaps we could negotiate a fabric for postage swap if you dont want American $$...

Oh, did I mention that these will all be used for charity quilts if I should happen to win...

Wow, how nice of you to do this. Perhaps when I've been quilting for a longer amount of time I too will have such delightful oddds and ends. Currently anything "endy" I have goes to make perinatal quilts for charity, none for me though, I can't afford the postage.

Hi Kate, what a lovely selection of blocks. I would be interested in any of them; postage no problem

Hi Kate, I would love the crackers or the baskets: the crackers as they would add to my general sense of festive cheer ( tongue in cheek, just having trudged round Kingston!)or the baskets, as I am so unlikely to ever make these and yet I always admire basket quilts when I see them. Are these good enough reasons? Oh forgot, I can probably come by and pick them up as I live near you!

Can I put in a hands up for the Friendship Stars please. And as I live in Wales the postage shouldn't be too much.

Hi Kate
Can't believe how much you are giving away! Anyway, I would just love some of the Jacob's ladder or basket blocks if I were lucky enough to win.
Always enjoy reading your blog and am amazed at how much great work you do both in quilting and in your contributions to BQL and about.com.
Janet x

just thought I would comment (don't pick me, customs/duty, etc)...
I ve been reading your blog for a while now. Perhaps next time, you could just make a charity quilt of the blocks and donate it within your own locality?

You know I would love any of these sets as I make alot of charity quilts. But I would especially like to have the cracker blocks. I won that months block lotto. What I won won't make a very large quilt so I would love to have some more.BTW, no problem paying for the shipping in US currency.

ooh, yes please, I'd love to play. would be so thrilled with any set, but specially the paths and stiles or the scrappy strings. crossing my fingers now....

if you have any lef I would love one too!

Hi, please please can I put a bid in for the postage stamp blocks? I did that swap with you and have some left over and would really love to combine them to do something else with them. Thanks :-)

wow...what a giveaway! id be happy with the baskets or the scrappy strips! The jacobs ladder blocks are nice, but i already have those :)
Id be happy to send postage too...i suppose its only fair ;)
What fun!