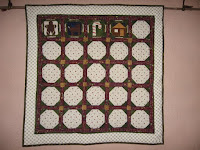 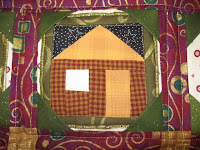 Did a little more quilting on the border of Angela's quilt this morning, while waiting for the gas guy to come fix the boiler* but it's more or less the same as yesterday, so I won't show another photo.
Here's the advent calendar today - I chose this house, which looks warm and cosy - no doubt thinking of my own colder, less cosy (at the time) house.
I did receive a lovely arch for the arch swap today, but the photo I took is really not great, so I'm going to try again if I can tomorrow or Saturday in a little natural light. If not, you can see the not great photo instead...
*which he appears to have done, with the caveat that he's slightly suprised that the one problem he corrected fixed the whole thing, as he wouldn't have necessarily expected it to - but as it's working properly, there's not really anything else he can do at the moment. But not to be TOO shocked should it go wrong again in the same way. At least we do have heat now, which is good. Of course, it's about 7 or 8 degrees warmer outside today than yesterday... Typical!
Posted by Kate North at 10:18 pm

Happy to see you now have heat again. We have electric heat here and even with the temperatures being around freezing, it would get very uncomfortable should we loose our heat.