Lutradur and lace, plus stitching - and more, of course 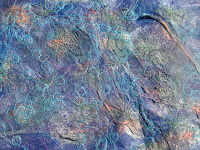 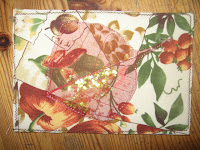 So, today was Alex's first day of Big School. Today was only a half day - he came home before lunch - but tomorrow, he will be there all day. I will, however, have to resist the urge to spend the entire day in my sewing room (which is a shame, as I need a bit of a tidying up, too) as I have a dentist appointment (just the routine checkup & cleaning, nothing icky) and I have to go grocery shopping. As we are still up in the air about when I might be travelling for the funeral service, I am just planning my week as if I'll be here the whole week - if it changes, it changes. Que sera sera, and all that. Otherwise I'll go mental -- no snide comments, thanks :)

But I digress. I did get some time to work this morning - first, I added some stitching to my lutradur and lace piece, in three colours (teal, green, purple), which I think really add some nice texture. I want to add some other stuff too, but think I need to plan precisely what it will be first, as there may be placement issues, for example if it's a book cover, where the spine will be and so on. I have some interesting metal bits I think might be nice with it. Maybe tomorrow - I must remember to have a look at small notebooks in Sainsburys tomorrow...

I also put together another little sandwich of lutradur, scrim and lace (this time with more scrim & more lace) to paint up, and have added a few initial bits of paint - will show that later, when it's interesting (which I hope it will be!)

And then I did some quilting - just a loop meander - on the black and white and red baby quilt. I can't say I'm totally thrilled with it - it would be much better on the longarm - but it's ok, and well, you gotta start somewhere. And I need to get that piece quilted. (It's not finished, I will show it when it is.) Then it was time to go collect Alex and run my errand, which was to one his favourite places... Ikea. 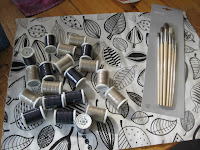 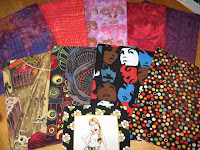 I won't show you all my purchases from Ikea (most are storage related and not that interesting to anyone but me) but I will show the arty things I bought - at left, a piece of fabric, white with leaves, which I think will dye (or paint) in an interesting fashion, and make a nice base for some leaf themed cards I have coming up which I hadn't decided what to do for, yet. Some cheap paintbrushes (self-explanatory) and the thread, which is cotton, was on sale for 10p per reel, so how could I resist? (I used to think their price of 99p per reel was good, but this is just silly). Really good for generic piecing.

When I finally (after being stuck in the most appalling traffic ever, taking nearly 20 minutes just to get to a place 50 metres down the road where I could turn and go a different way) got home, the post was waiting, with the lovely leaf card above from Diane for the aforementioned swap (I'm not late; she's early). And the fabric on the right below arrived - an order from the lovely Margie Andermatt at Foothill Fabric in the US. Now, I have to explain about this fabric order, which is totally the fault of Joanna of Serenity is Bliss, who admired some fabric I'd bought in Ireland, which I'd (of course) blogged. We got to talking about this particular designer - Lonni Rossi - and she mentioned that Foothill Fabrics had some on sale, and well...Let's just say that willpower is not my strongest suit. :) So, the five half yard pieces at the top of the photo are Joanna's fault; the 4 half yard pieces at the bottom are due to Margie's excellent customer service - when she received my order, she emailed to say that the postage was going to be about the same as for a global priority envelope, so if I wanted to add any more, the postage would be only about $1 more... So of course, I couldn't resist these Alexander Henry prints, which I have no specific use for, other than to admire and use someday. It's so hard to resist buying fabric from the US at the moment - the whole 4.5 yards cost me about £20 including postage - so much cheaper than most of what you'd find here - it seems criminal NOT to buy!
Posted by Kate North at 8:25 pm

Labels: challenges, look what i got, postcards received, surface embellishment

Love the fabric on the left.

How great is that! What fast service. I'm so glad you found some fabrics you like! I love those that you got!

i just ordered some alexander henry fabric too....just too groovy to resist! i have plans to make a quilt for my step sister in law who is also super groovy :) cheers~
lisajo