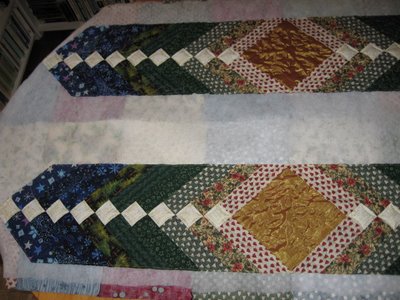 [Everything in this instance, being a broken toilet - or more precisely, a broken part of the toilet that allows it to be flushed via the pullchain. Luckily, the toilet itself works fine, though at the moment, the only way to flush it is to reach inside the cistern and pull the plug up. Which in itself is not that big a deal, if only the cistern weren't mounted at nearly ceiling level... I thought I might have to spend lots of time dealing with it, but luckily, my friend Mike (Nina's dad from school) took it all in hand and is sorting it out. So I was able to quilt after all.] 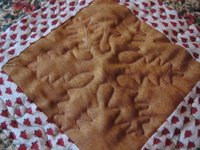 So, here are the quilted table runners. Or rather, half of each of the two of them - I couldn't get a photo of the full length of them easily. I did continuous curves in the cream coloured squares, a snowflake (left) in the gold, and a loop meander with a few stars and holly leaves thrown in, in the rest of it. Now I have to trim and bind, and hey presto! Turned out well, and quite a quick project. I had to photograph the snowflake with the flash off, as the gold semi-metallic fabric does not respond to flash too well. Still, I think it shows fairly well - this is a single snowflake from a roll panto. Quite effective. 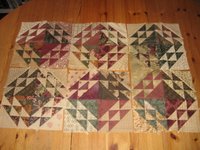 As it happens, the quilting went quickly enough on the runners that I even had time to do a bit of piecing - so back to the corn and beans blocks. I have six fours finished, but quite a few more nearly done, so it's really starting to show the secondary patterns when I lay them out. I'm having fun with this one, and I know a lot of you are enjoying seeing it, as I'm getting good comments on it!
Posted by Kate North at 2:44 pm

Labels: christmas, gifts for others, quilts in progress

THe table runners are very nice and I love the corn and beans quilt. Great secondary pattern. But what a lot of triangles!