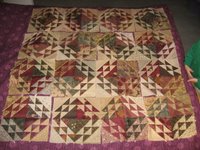 So, I finished the corn and beans blocks today, and sewed together the last of them into "fours" . Here they are laid out on the bed in any old order; before I sew them any further together, I will probably fiddle with the layout a little bit - but will try not to get too picky about it all... I'm not sure whether I'm going to try to group the reds together or mix them alll in - probably best to try it each way and see what it looks like. But on the whole, I think it works.


[The top quilt on my bed (which is the best surface in my house for laying out blocks) is a trip around the world, with nine-patches in it, but the backing is a purple tone on tone fabric - I can't tell you how useful that backing has been in quilt design - it's almost a solid colour, so it makes a great surface for laying blocks out on. It can frequently be glimpsed behind various quilt pictures I take. ] 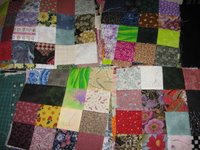 The other thing I worked on today is an upcoming (next year) scrappy swap - simply blocks made up of 4 squares by 4 squares (2.5 inch squares) - to yeild an 8 inch block. These are something I tend to make with small scraps as I sew other things, using them as enders and leaders. This is a pile of blocks made before, some of which are suitable for swapping (some are a little less precise than I like to swap out, but are fine for my own use). I'll add to these over the next few months until I have enough for the swap. The fun thing with a swap like this is getting everyone else's blocks in - so many different fabrics - and it's fun to spot fabrics you own yourself and to ooh and aah (or not, as the case may be!) over the ones you don't. This swap will be on the scrapquilting forum on delphi, and is still taking signups until mid-December, if anyone wants to play along...
Posted by Kate North at 10:09 pm

Corn and Beans looks great - love the advent calendar, too.