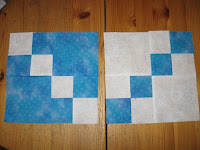 Spent some time working today, hoorah! Finished off (I think) the sunset piece - added a little more angelina to soften the look. Now I have to bind it, and sew down the sleeve, and it will be done.

That didn't take very long, so I made four pairs of double four patch blocks in blue and white-on-white for the January Block Lotto on quilting.about.com. Technically, it's not January, but as the instructions are up early (there was no December block), I won't be spoiling anything by sharing this photo. The other three pairs are similar, but with different blues. 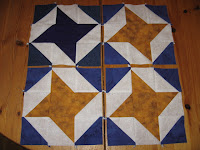 And then (productive day, or what?) I also worked on some blocks for a winter swap in jewel tones on quiltshoppe forum on delphi. This photo is a little dark, but essentially, the corners are to be a deep, sapphire type blue, with the central stars in another jewel tone - the three gold ones are a topaz type colour and the dark one is actually a deep purple - just doesn't show well. As the background for those is white on white as well, it seemed sensible to work on them at the same time.

I probably won't get much sewing time tomorrow, as New Year's Day is traditionally when I take down all my Christmas decorations, and in keeping with that, I usually rearrange some of my ornaments, too - I do have one box of stuff I rotate, as I have too many pieces of pottery, etc to keep them all out at the same time. But I only allow myself a small amount of stuff in storage or it just gets too silly. Luckily, I didn't get any new ornaments/knick-knacks for Christmas, so I don't have to do TOO much rearranging, but I do like to move it around from time to time, otherwise, I think you stop seeing things so much. And this is a good time to do it. And give everything a really good dusting at the same time...
Posted by Kate North at 5:23 pm