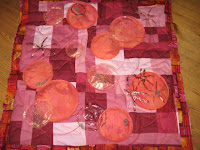 Spent my sewing time yesterday (nice to have some of that!) working on the little art quilt "Sunset on another planet" -- first I finished the quilting, mostly in the orange variegated thread, but also added a little red, including some quilted circles. Then I used angelina to make some sheer suns to add on top. Then I took it downstairs and added some foiling and tiny beads. I think the foiling looks a little raw, so I think I'm probably going to add a little more angelina in places, just to soften it a little - especially on the sun with three foil stars. Then I think it's probably finished (though I still have to stitch the binding down, as you can no doubt see in the photo. On the whole, I'm happy with it, though, and as it's not "due" until the end of January, it's nice to be ahead of time, for once!

It's a lovely combination of colours - very effective.