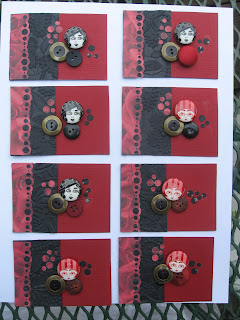 So, believe it or not, I made some ATCs today - they aren't sewn, partly because I'm not at home with my machine (though my mother does have a sewing machine) and partly because I wanted to sit outside and chat with everyone while working. The cards are obviously built around the cute face buttons I got at JoAnn's yesterday (if I use some of the stuff I buy right away, it justifies buying it in the first place, right?); the incidental buttons came from my mother's button box and the paper all came from JoAnn's as well.

This was a little bit of a group effort - my sister-in-law helped pick out good buttons from the button box and my elder daughter helped me glue on the little paper circles, though she did complain about how fiddly it was (I agreed - but as she'd offered to help...). A couple of these will go off for the birthday swap, the others will be up for trading on ATCs for All (or elsewhere).
Posted by Kate North at 11:15 pm

Those are really cute! I love the face buttons.

How productive you are on vacation 1,000 of miles away from home :) You amaze me Kate! Great looking cards!

Those ATC's are just too cute. Great that you capitalized on all the extra help.

Love those buttons! i had to go score me some :) They didnt have any of the black, but they did have the red...im a button junkie! very nice!