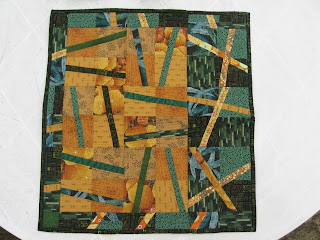 Lookie what I got in the post today - woohoo! This is my quilt from the Miniature Booty II swap from Julie - some of you will I know recognise it from her blog... Anyway. It's great, isn't it? Julie says it's inspired by colours of Northern California in the summertime. Read more about it here...


I like it so much I had to hang it straight away - here it is in my living room (pardon the angle; it was taken through a doorway). I moved a photograph which was hanging in the same place - am waiting to see how long it will take DH to comment on it (or notice it!). Also got some lovely goodies - notepad, ladybird needlecase, little shaped erasers (which I foresee being taken straight away by small people) and a great cross-stitch pattern which I am itching to start but won't until I finish at least two of my already started projects. 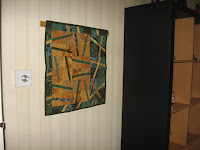 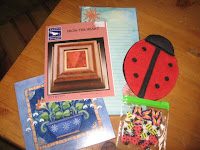 I did do quite a bit of sewing related stuff today, as it happens, but I can't show any of it - there were some blocks for the September block lotto, which is still in the sneak peek stage and some further testing of the October bag pattern (nearly done!) and my quilt group came around and we did some work on our group quilt, which in theory I could show, but I forgot to take any photos. Who knows, maybe tomorrow...
Posted by Kate North at 10:05 pm

You are sooooo lucky! I saw that on Julie's blog and loved it when i first saw it.

Vicki took the words right out of my mouth. She's quick, that girl ;)

the new little quilt is awsome! it fits you!!