Productive day - but no sewing 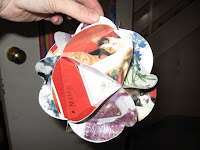 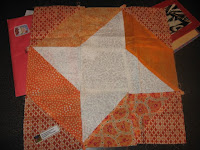 Usually, I take my Christmas decorations down on New Year's Day, but this year, we are going to be up at Geoff's mum's house until New Years - and as I couldn't face coming home to a house full of decorations needing to be taken down and cleaning needing to be done, I decided to get them down early, today.

That in itself doesn't take that long, but I also do a fairly thorough cleaning and then, rearrange all the pottery, knick-knacks and so on which adorn the house (I draw the line at moving the pictures which are hanging on the walls) . One thing it accomplishes is that everything gets a thorough dusting (or washing, where necessary) but also, I think you tend to stop really seeing things when they stay in the same place for too long. So this is a chance to refresh the way the house looks. And I have about one box too many knick knacks and bits of pottery, so some of it goes away for a year...

I did manage to do something with some of our Christmas cards - made one of these ball ornaments (it still needs a string of some sort - and I might put some glitter around the edges). I remember we had one of these when I was a kid - it had a small bit of fake mistletoe hanging off the bottom. My mother may still have it, who knows. Anyway, it takes 20 circles of card and some tacky glue (I totally recommend the tacky glue - it removes the need for paper clips, which get really fiddly), and you can find the instructions here.

I also got a few things in the post (though still not the missing postcards from Vicki and Carole, sigh) - the orange block above for the orange swap, the two postcards below - one is for the 1950's swap, from Anne R; the other is for the reused and recycled swap, from Caroline. The central panel is a crisp packet! 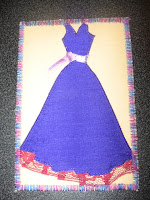 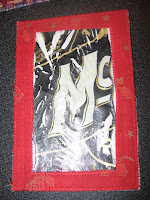