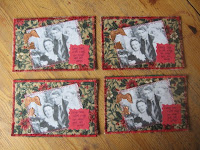 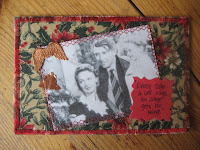 I admit that I had a bit of a panic this morning when I started looking at my lists and thinking about everything that has to be done in December. When I planned December, I kind of forgot my mother was coming - or rather, I didn't really forget that, I just forgot to subtract all the time we'd be doing other things (fun things, don't get me wrong) like going to Camden Market, baking Christmas cookies, having coffee with friends, and so on. Anyway, I feel much better today as I have had a good day. I finished my 1940's swap, which I'm very pleased with - it managed to capture a moment from the 1940's and at the same time, be Christmassy. The 40s cards also qualify for the Mixed Media Monday challenge this week, which is wings. Nice coincidence, there. I nearly finished my L is for swap (Lightbulbs) - just need to put the backs on and edge them. I edged (and mailed) another handful of Christmas cards - just a few more of those to go. 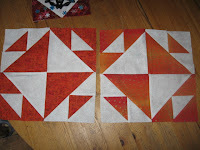 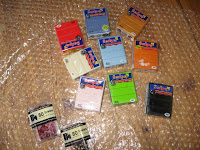 I did two blocks for the orange swap (which actually isn't due to mail until mid January, but I got bored of satin stitching and needed to piece something), which can go out tomorrow in the post. Might as well send them now, not let them languish in my sewing room! The clay is something that came in the post while I was working (the doorbell kept ringing -I thought I was going to go mad). May I recommend to UK readers the website Craft Haven - I ordered this stuff on Sunday and it arrived today (Tuesday). Very quick. I finally decided I would have to order from elsewhere as the stuff I ordered off eBay just wasn't coming. I'm sure it did get mailed, and lost, as I have ordered from him before with no problems, but I wasn't thrilled with his handling of the lost stuff, so I decided to go elsewhere. 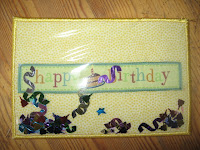 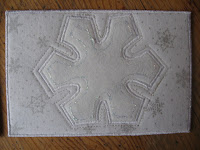 Also in the post were these two postcards - one from Barbara B from the Snowflake Challenge on Arts in the Mail, the other from Bev, a belated birthday card (which is really cool, as it has plastic on the front and glitter confetti inside, so you can shake it) - actually, it wouldn't have been very belated, but it took ages to get here for some reason - I notice it's postmarked on the 21st November. 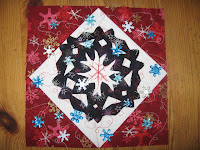 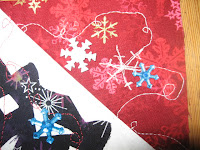 After lunch and a run to the post office and shop, I decided to work on this week's journal quilt - not surprisingly, the subject matter is snowflakes - I have used one of the snowflake blocks which will be surplus for the Four Seasons project, turned it on point, added more snowflake fabric to the corners, quilted it with (take a wild guess) snowflakes, and added the very end of my snowflake brads - I had three left after everything else - and lots of little snowflake thingies glued on. The closeup shows a detail of the quilting, the brad, the fabrics and a thingie, all in one!

And as if that wasn't enough, I still had half an hour left, so instead of backing and edging the JQ, which I will do tomorrow once the glue is dried all the way, I pulled out a little wallhanging I am doing for one of my secret santas - it's an angel block I had in my stash - and sandwiched it and did a little quilting on it. No prizes for guessing what type of motif I am using to quilt the background (which is a blue fabric with stars on it)! I didn't finish (photos tomorrow, when I've done more), but I did make good progress, and I admit I feel MUCH better than I did this morning about all my committments. Once the lightbulb cards go out, I only have 3 things due before the end of December, which is much less stressful. And one is a recycled & reused swap, which at least I will be able to do without much planning (I just grab stuff and build for those).
Posted by Kate North at 6:17 pm

Hey Kate, just a minor correction. That card was for the Snowflake Challenge. My Chritmas card was sent the following day, so you should get that one tomorrow.

I's amazing, isn't it, when you feel overwhelmed by all the 647 things you have to get done by tomorrow, and then suddenly, you find you only have 2 more to do! You really had a very productive day. Enjoy your Mum's visit.

You've been a busy girl! I love the snowflake blocks and quilting. I may be trying that one of these days.

I'm so glad you were able to tie this into Mixed Media Monday, Kate. I love your pieces and the movie, It's a Wonderful Life. Diane

Kate - you amaze me with what you are able to do in such a small amount of time. Love the journal quilt and the postcards.

I'm worn out from reading what you've achieved today, but well done. You must feel a great sense of achievement. And the pressure's off too. Thank you for the tips you've sent me. I shall have to have a go.

Ooh, I forgot! Thanks for the link to Craft Haven

Kate, I love the It's a Wonderful Life card. That is my fav Christmas movie. That and the original Miracle on 34th Street with Natalie Wood.

What a wonderful card. Love the movie, too!

You are so productive - puts the rest of us to shame! Love the orange blocks.

GO KATE GO!!! Love the "It's a Wonderful Life" postcards!!! And here i was just deciding that my homemade gifts would not be done in time, and perhaps it was time to order gift cards...you have inspired me!
cheers~
lisajo

Your work is wonderful Kate! Love the snowflake block, can't wait to see what you do in the quilt challenge with all those lovely snowflakes. It's a Wonderful life postcard is a beauty, everything looks so good together .

Hey Katie,
I just noticed your list of shame name.. Please can you give it a different name such as my list of creative WIPs, or too little time so much creativity...etc.
Just to encourage you with positive words of affirmation since you make such lovely and imaginative things
Cheers Diane in Australia