Some of you may have followed my Nesting Robin last year - this is now finished (although I have one more round to do when I come back from holiday, which is to repeat an element used somewhere near the centre of the quilt- I am going to add some more flying pigs) and a new one is beginning. The idea is to start with a block or row (or whatever) and each month, add something to it, based on the isntructions given by one of the participants. For instance, you might have to add squares or curves or use applique. Usually the instructions given are fairly broad so that you can interpret it in a way that will suit your own project. It's based on the more traditional round robin - where each player makes a centre and passes it to the next person, who adds a round, and so on. But it's more pracitcal to doing one that "nests" rather than flies for several reasons - for one thing, you don't have to post it on to the next person, so that saves money. But also, it means you can work to your own schedule, and you don't have to worry about the quality of work that goes into any given round. I love doing them because although there's usually still lots of room for interpretation, you also get pushed a bit outside what might be your normal boundaries or tendencies.

Anyway. The new one will only be 8 rounds long, to keep the quilt from getting too big. And I have decided to do it as a row robin - so instead of making a centre block and working outward, I will do a starting row, and then one row each month - this will work out nicely to a single bed sized quilt. I am going to do the rows each in a single colour (though not a single fabric) with a black background - the starting row, I have done in 8 different single colours, and I think it looks very nice, if I do say so myself! The photo is not great, but it's chucking down rain outside and I have nowhere great to lay this out to photograph it. Subsequent months can hopefully hang from the washing line, as per my usual quilt photographing technique... 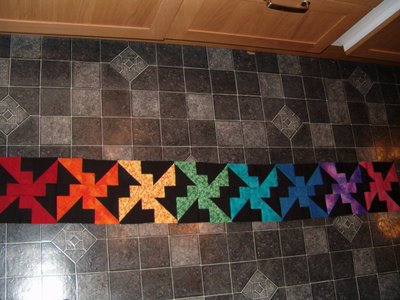