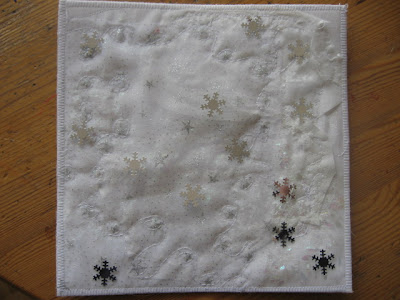 Apparently, ten years ago was the year it snowed in London in April - I knew there was one, but had forgotten just when it was. My journal quilt has reminded me it was 2008!

"Consequently, I  decided to do my journal quilt for the week with a snow theme - a heavy (for London) snowfall in April is too bizarre not to mark in some way... The photo doesn't really snow this mini quilt to good effect - I started with a piece of white-on-white fabric, and sprinkled some "snow glitter" which I bought in a kids' craft section on it - looks like small pieces of white cellophane chopped up - then covered that with some white organza and free motion quilted it with loops and some snowflakes, of course. Then I added some melted tyvek and a piece of white sheer fabric with stars on it and topped it off with silver snowflake sequins. The back is a piece of paper which says "let it snow" all over it. As I said, too good an opportunity to miss..."