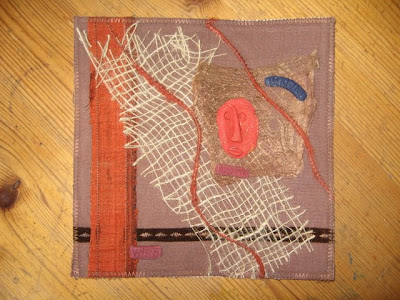 The background of this journal quilt is linen, and is from a pair of much loved trousers that have simply worn so much they aren't really, well, wearable any more. So rather than throw them out, I harvested them for backgrounds (for this and for a load of ATCs and fabric postcards made at the same time). Then added some strips of brown velvet from a square I received in a treasure hunt, some brown silk I bought in San Diego about 12 years ago, some scrim, brown mulberry bark, and brown yarn which I was given by my friend Barbara (who doesn't blog) who inherited it from an artist friend on her death and passed it along to me (with a number of other treasures) to use in my work. Sheila had done a lot of interesting multi-media work with fabric, lace, yarn, and so on, so you can imagine there were lots of lovely goodies I took away with me. And some clay faces and words. I think it's interesting - though I didn't notice until just now - that on the postcards, the brown velvet wanted to be at the top, but on the JQ, it wanted to be at the bottom. Whatever.
Posted by Kate North at 8:45 am