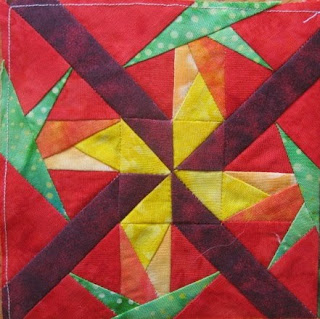 During the past year and a half, I've been taking part in a round robin of quilting bloggers - just a small wallhanging size project, and each month, it arrives and you have to add a specific size piece or complete a step like "applique something". I've not been able to show them, though, as they've been being kept secret. Well, now they are beginning to filter their way home, so as the finished photos come through, I can share them (and of course, what work I did on them).

This piece above was the starting block for Debbie's quilt - the piece she made. 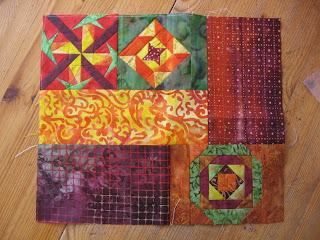 This is how the piece looked when it left me - I added the bottom row - a pieced pineapple type block and an unpieced piece of gridded batik fabric (not all additions needed to be pieced, as there would be applique and other embellishments added later). 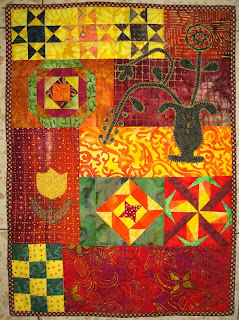 And here is the finished piece. See how it got turned upside down at some point? Doesn't matter, though, it still works! 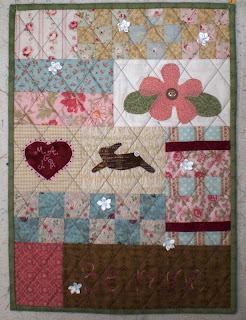 This piece, which is Jan's, I only have the photo of the finished item - can't find a photo of my step of it (computer died between then and now, so it might be lost because of that - or I might simply have forgotten to take one!). However, what I did was add what is now the top row - not sure if it was at the time or not - the three nine-patch blocks and the unpieced piece of floral fabric at top left. 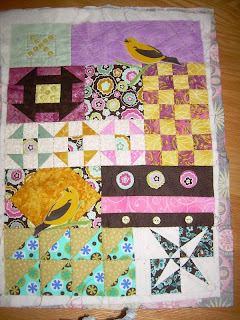 And this piece, which is Nancy's (which she is going to bind herself, but hasn't yet done), came to me quite each on in the process - what I added was only the third step - and is the three shoo-fly blocks which are sort of in the middle row. When I got the piece it was only the monkey wrench block and the cool retro fabric square with the brown background. It's so interesting to see how these have changed along the way. I'll be sharing more as they come home to their owners.

The ladies involved have decided not to do another round of this round robin, which is fair enough, but I think I might carry on with it as an independent project myself once these are all finished - the steps are very small, even at the end, when you get somewhat larger ones like "quilt the top" - as the whole piece is only 13x18. I might not start until September, as I will be away for all of August - then again, I might start in July, as the August step would only be a 4x5 block. If I do, perhaps some of you would like to follow along at home as well - I think it would be a fairly painless way to make a nice wallhanging...
Posted by Kate North at 10:42 pm

Wow, those are pretty neat. I would be so stressed over every one I worked on, thinking that what I added would make it not be pretty.

These area all beautiful. I would love to have a stay at home robin, and follow along. It is the mailing and trying to meet others deadlines expectations that keep me from joining swaps.

A stay-at-home robin is a really good idea - would this be a square robin as opposed to a round robin?? When shall we start gathering fabrics??

Hi, I came over from Barbara's blog. This round robin is the same one we're doing now with a quilt group in Alton and we did it in Portugal too (http://angiequilts.blogspot.com/2008/05/round-robin.html )it's a great idea to do a bloggy one. Can I play please? I hope so.