The end of the cushions 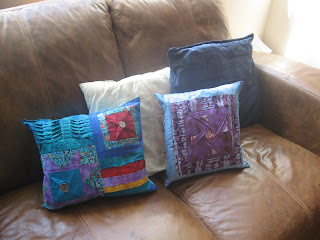 I did a fair bit of work today, but as so often happens these days, I can't show most of it! The main bit of what I worked on, a round for the Bloggers Round Robin, has to stay secret. However, I can show a few more cushions I made from the 3D birthday swap blocks - the sampler type block from Julie and the African type block which Helen sent me. I have decided to keep the other three blocks I have from the swap for other things (Margaret's lovely Cathedral Windows block is already hanging in my hallway as a miniquilt). There's a large block from Joy which I thinkI will turn into a small wallhanging quilt along with some of the blocks from last year's swap, which are conventiently in the same types of fabrics and colours. And then there's the other block from Helen, which Margaret commented would make a great Christmas decoration - she's right, so I think I will turn it into a small Christmas hanging and finally, the block from Michelle, which I decided I would also make into a small wallhanging, rather than a cushion. It's such a lovely delicate block; it would look great on a wall somewhere.
Posted by Kate North at 7:44 pm