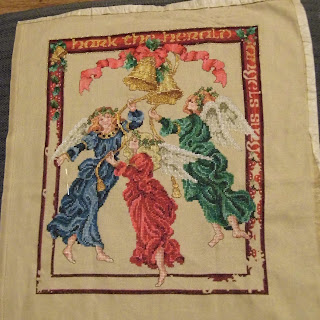 Well, I can't even tell you the last time I stitched on this before this week - last year I had intended to, but wasn't very well and then just couldn't face it. This year, I was feeling cross-stitchy again, and Christmassy, too, so I pulled it out to work on. I don't have a before picture, but most of the work wouldn't show much anyway, as I did a bunch of fiddly things in the middle, mainly: 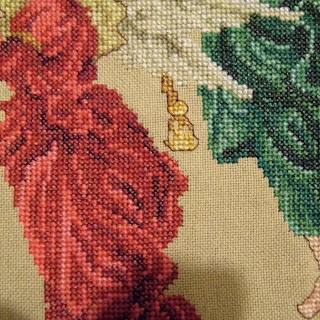 I filled in (mostly; I am missing the final colour for this) and outlined the end of this bell pull. 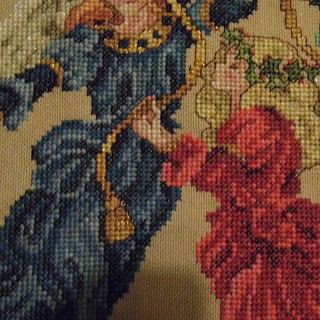 I outlined the end of this bell pull, where it sits on the blue dress. And filled in some missing stitches in the red sleeve - it was only one colour, so I must have been missing it before and have bought it since. 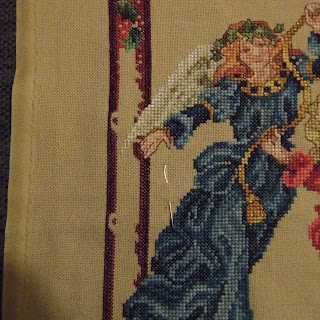 I outlined the blue angels hand (there are actually a few stitches still missing in her thumb, which I need to go back to) - and a few stitches in the collar of her robe.

And then I started on a new row of red in the border. I'm going to work on the red border next, so next week the progress should be a bit more visible. It's actually not all that far off being finished, though I doubt it will happen this year.  All the central bit is stitched, except a few stitches here and there (and some beads in the head-dresses), so it's really just the border to finish off. I say "just", as though it can be used in that context!