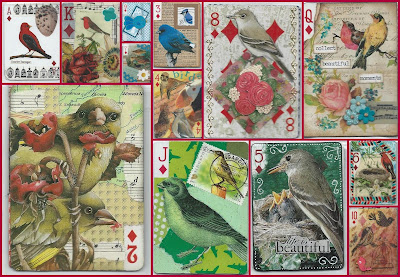 I'm sure I've shown lots of APCs (Altered Playing Cards) which I have made for other people in various themes, and I think I showed, a while back, a set of butterfly themed cards which I've collected. Those were largely part of a specific swap series aimed at collecting a butterfly deck. This deck, which features birds, was accumulated over a longer period, through a series of individual swaps, Pick-a-theme swaps and other situations. These are the diamonds. I didn't request specific birds or a specific style, so that part is just down to the artist making the card. I did receive a few cards which featured crows or ravens or similar birds, and those I moved over to another deck I am collecting - one with exclusively crows/ravens (or other corvidae).  I'll try to show the other suits in the next few weeks!