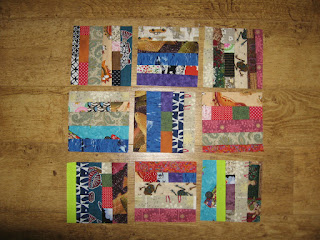 It's been a while since I had the chance to play in the Block Lotto, but having finished up the two tops from Ben's clothes, I am now able to play a bit more (not that I've had a lot of time for sewing in general this year, with one thing and another). So I took the chance to make a few pieced strings for the block lotto, and to use a handful of strings from my scrap baskets. I've got one more thing I have to do in early January, and then I'm going to try to get through my basket of block sets. It would be nice to get that down to just one or two. We'll see if I have the will power (probably not, knowing me...)