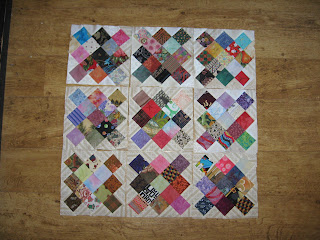 I've been using these blocks as enders and leaders for a while, and have now made 16 of them, so I think I'll stop for the time being, and perhaps sew the blocks into a top at some point. Or else just let them hang around in a pile for a while!  I was really good in 2012 about not just making blocks, but actually assembling them into tops and doing something with the tops (in most cases, donating them) but at the moment, all I want to do is make blocks, so I think there will be some block set accumulation in the early part of 2013. So be it!

The colors are really pretty, Kate, on this one!

Great blocks... just been reading your blog, nice to see you're block making again because I know that's what you like to do!