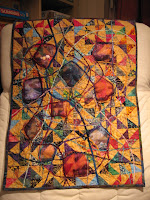 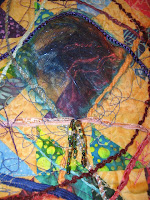 And now for something completely different? My mother thought it was fairly different, at any rate (but I think that was different in a good way). This is a small piece, 18x24 and is for Quiltswap 4. Perhaps I shouldn't blog it, as the pieces are anonymous, but I can't imagine too many people in Quiltswap read my blog and if they do, well, will knowing a piece is by me make them like it more or less than they would have? I doubt it. It's not like I'm an internationally known quilter or anything. And anyway, I've already blogged it several times, so it's too late now!

The background is pieced from leftover batik QST units - I used them for a series of triangle postcards a while back and decided I liked the effect, so used some more here. There are still more of them, and I'm getting tired of them, so if anyone out there would like a handful, let me know! (I'm serious here - I'd be glad to send them to anyone who can use them - the units are about 2 inches square and each one contains one triangle in the yellowy sand colour and one other colour and I probably have a hundred or so left.)

Onto the background, I then attached pieces of organza, which I sewed down with cotton thread, capturing a variety of items inside and used a soldering iron to remove the excess organza. Next, I used Markal paintsticks to outline the edges of the pockets, and then couched a variety of threads all over the top, including around the organza pockets. The piece was then fairly heavily machine quilted using loops and vague flowers. Finally, after binding, I added strands of beads (which hang loose) at the base of each organza pocket. And that, as they say, is that. On the whole, I'm fairly happy with it - it's kind of funky and worked more or less the way I imagined, which is all we can hope for in these things, right? 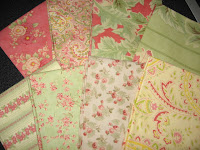 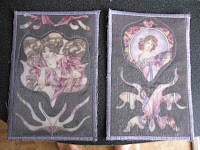 And now on to other things. I received the above fabrics in the post today - my fat quarter frenzy club - and they have been duly washed and ironed (though not put away yet). The good thing about this club (other than getting fabric in the post each month) is that often the fabric is not stuff I'd necessarily choose (though I usually don't dislike it), so it fills holes in my stash - very useful for block lottos, swaps, challenges and so forth. And postcards, of course.

Two postcards finished today - one will be going out as a birthday card tomorrow, the other will form, with its yet-to-be-completed comrades, my cards for the 1900's swap on Arts in the Mail. Hopefully I will get a chance to finish them tomorrow. It may not show in this photo, but I've added a sheer layer over the nouveau print and cut-out, stitched it down in a few places, and edged it. This card is much simpler in technique (or at least in the number of techniques!) than many I do, but I think the print in many ways speaks for itself, so I didn't want to do anything too distracting. I did try one with some fabric paint, but didn't like it, so didn't pursue it further. 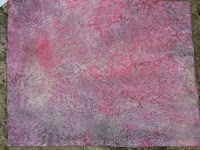 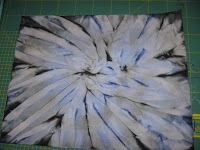 And finally, I managed to finish off my sunprints today for the swap with my dyeing group. The sun immediately went inside as soon as I got my prints all out, so except for the salt one (left), I ended up finishing them off in the oven. I tried doing some folding and tying on them to see what would happen, in addition to using my favourite method of scrunching - I'm not sure the others worked very well, but this one, which I painted and then gathered into a loose spiral (like for doing t-shirts) and then dunked one side of into a different colour paint, before setting out in the sun/putting in the oven came out really well (or at least, I love it. Actually, I realised I now have 9 pieces and I only need 8, so I'm keeping it
Posted by Kate North at 11:01 pm

I always love your stuff but especially the art nouveau postcards and spiral sunprint today. Also, that FQ club fabric. I would buy something like that and large florals, other than that, I prefer my handdyes for most of what I do at the moment. Vicky in FL

Wow! I love that spiral sunprint... It feels --to me, anyway! -- like a wholecloth stylized flower, all ready for some of your fun embellishments.

I do like your sunprints, Kate. Is the oven a cool one? I never thought of doing that, what a good idea. And looking at your flickr pics, do you dye the fabric first and then scrunch/fold to dry out or the other way around?

the blue and white sunprint is a keeper! .... I have plenty of sun perhaps I could send you some
Dawn U

I love your swap piece and the sun prints are lovely!

I'd be happy to swap some of those triangles for whatever! I know that you are in the artwemail group and had mentioned that eyelash was a bit expensive. I have a bit of that and other doodads that I think you might like.

The triangles would be cool for a doll quilt I am doing.