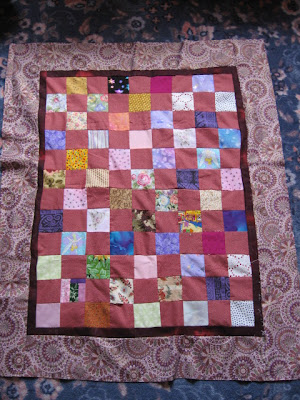 This is Olivia's nine-patch quilt, with the borders now attached. It's not quite as wavy as in the photo, though it is a little wavy - but then she's 7, so I guess a little waviness can be allowed... This is what I worked on yesterday - or rather, I tidied up my sewing room and scraps while she worked on this, and I supervised, ironed, cut strips for borders and helped pin them on. Then Sarah worked on her log cabin for a while (photos of that to come in future), and I carried on not sewing. I did get a lot of miscellaneous tidying up done, which is good. 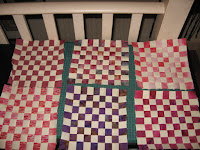 But today I took back the sewing room and first did a number of small things that have been waiting for me to do - a couple of blocks for a block shower, a block for a cheering up project someone is organising, a label, attached some binding, and so on. While I did that, I supervised some homework (which mainly consists of spelling words for the child who is writing something). And then I worked on these blocks after lunch - I only have about 4 more to do and I'll be ready to put them together. I think it's going to look really nice. I'll keep you posted!
Posted by Kate North at 4:44 pm

Any amount of wavy is allowed when you are seven. I love to see kids quilting. My Granddaughters love to quilt when they come here.

Well done Olivia! Was it by machine?