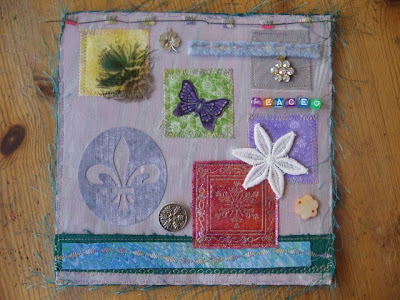 I worked on this journal quilt in a week when I received lots of lovely things in the post, so I decided  it would be fun to do a quilt using only items I had received from other people (not necessarily during this particular week, but just to mark the joy of it) - not counting things I've bought, though allowing things I have swapped for. And so, this JQ is made up entirely of things from others, except for the vilene (stabiliser inside), the thread I used and the paper on the back. I know where some of these items came from, but some I can't remember for certain - and it's certainly the case that far more people have sent me things than are represented here - I have received things because of swaps, as birthday presents, things I won in giveaways, things sent as thank you's for things I've sent (which I wasn't asking for anything in return for - hence, not a swap), as extras with a purchase from a seller on eBay or etsy, as consolation squishies when my dad died, and sometimes, just as RAKs (random acts of kindness) - that is, for no reason at all, other than the fact that people are nice. I wanted to celebrate that with this quilt - what better way than to use some of the things!

I've included the original paragraph I wrote about who sent what, but it's been a while, so my apologies if some of the links don't work.

Here are some of what they are - the background is a piece of shibori, made by Ann H, which recently arrived with the shibori swap from my dyeing group. The three square pieces of fabric and the metallic button are from the scavenger hunt swap I did with Angela on Arts in the Mail - oh and the butterfly is cut from a square of fabric from that swap. The green silk strip, piece of marbled fabric and the fleur-de-lis stencil paper are from the grab-bag I won on Susan's blog. The red snowflake stamped in Angelina was made by chaos for an angelina technique swap in my surface embellishment group. The narrow strip of pale blue felt was one of the things I received (in bigger pieces) with my Valentine's Swap from Amy. The feather was in a recent goodie bag from Karol-Ann, sent from South Africa and was hand-collected by her lovely self. The "PEACE" letter beads are from Cathi, who sent them because she thought I'd use them more than she would. (I wanted to put LOVE to go with the heart, but there was no L - oh well!) The white lace flower was in a recent surprise RAK package from Penny. The bit of interesting thread/ribbon across the top of the piece was a free bobbin which came with an order of ephemera and bits from The Fruit Pixie. The eyelash yarn around the edge came from the stash of Annie, who sympathised with my moanings about the cost of eyelash yarn over here, when one only used it for trim rather than a whole scarf and sent me dozens of colours (ok, maybe a dozen - but it was a lot!). The piece of silk mesh (behind the felt and rhinestone flower) came in a wee package of silk scraps with a Christmas Card from Annica. The peach flower button is from Julie. The shamrock charm and the rhinestone flower came from someone(s) but I can't remember who. It's possible they might have come from Anne or Jane, who sent me bits back when my dad died. (If either of you ladies recognises one of those as being from you, leave a comment and I'll edit my post to say!) And if I got any of them wrong, please correct me - mostly I was doing it from memory, and we know what that's like...

As you can see, a great collection of stuff - and there many more things I have been sent on various occasions, which haven't made it into this little 8x8 journal quilt.
Posted by Kate North at 12:16 pm

Quilt til you wilt said...

I just read your post and was so surprised and pleased that something I sent to you was included in your journal page!! I’m no longer blogging on quilt til you wilt. I lost my mojo a few years ago and stopped but just recently started a new blog - quiltingeast2west. Wordpress.com. Glad to see you are still blogging. I see your photos on Instagram which are beautiful. You are so creative!