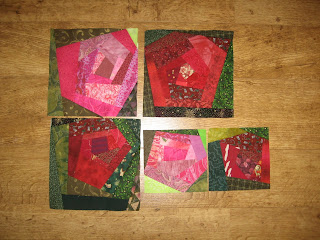 Today I had one of those days (all too rare) where I didn't actually have to do much of anything. We aren't putting up the Christmas tree until next weekend, I finished (more or less) my Christmas shopping yesterday, no one had any social engagements they needed to be ferried to or from, and the house is (reasonably) clean. So, I put some beef stew in the slow-cooker for dinner, played on the computer for a while, then did some sewing. In the afternoon, I hung out, played a game with the kids and mucked around. Lovely!

These wonky log-cabin roses are a gift for a friend, off in the post tomorrow (or sometime soon). While rooting around for reds, pinks and greens for these, I decided my scrap basket was in a complete state (not to mention, very full), so I decided to make some scrappy blocks - these are 4" blocks, which I will probably sash in black or white when putting together in a quilt, but they are a nice way to use up small scraps - I just sewed together whatever came to hand, based solely on compatible size (rather than colour or pattern), then trimmed them down to the right size. Some have quite small pieces if they've had the trimmings of another block incorporated into them! 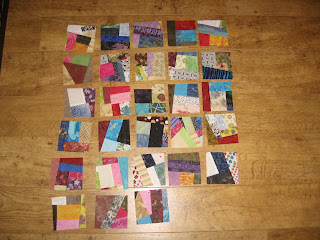 Needless to say, it's made almost no dent at all on the scrap basket, but I do intend to make some more. Perhaps lots more, who knows. They do provide a quick thing to turn to when there's not much sewing time, a state which I anticipate will occur quite a bit between now and Christmas.

I've also finally pulled out my Christmas cross-stitch - later this week I'll try to remember to show a photo of where it was at the end of the season last year, and what I've done so far this year - but I have to save something for those busy nights when no sewing has been done!
Posted by Kate North at 10:51 pm

Sounds like you had a lovely day, they kind we all need from time to time. Love all the blocks, but I'll keep the scrappy ones in mind as I think my scrap box is getting rather full. Enjoy the holidays!

I love the scrappy blocks! I'm going to have to try that with my scrap bins....

How funny - last week I started making some of those scrappy blocks too but mine are 6 inches. Very addictive - think I'm up to 54 done or something like that. Scrap pile has not gone down any though :-)

I love the wonky roses, Kate!

I have just decided, after reading your blog, that my next quilt is going to be a scrap quilt.
It is nice sometimes to have a relaxing day.

The srappy blocks look lovely, although it's true that the scrap basket never seems to get less, no matter how much you take from it!