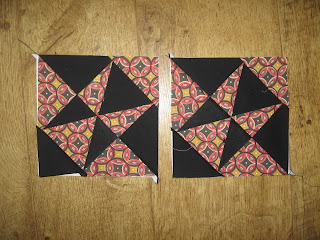 ...half because I want to do another two blocks with black and a different contrast before I send them off to Karol-Ann, with whom I am (in theory) doing a private block exchange. Neither of us has been great about blocks lately, what with long holidays to South Africa (her), more work than previously (me), leg injuries (her, thank goodness!), house renovations (both), kids (both), other sewing projects (both)... Anyway. I thought it was about time I did some more blocks, so I did this one, but I really liked the effect so I want to do another. I made these on Wednesday while waiting for the washing machine repair person, but have been waiting to show them until I did the other set. I think that was perhaps not a wise decision, so have decided to show them on their own, otherwise they might never get shown... They are 6" blocks. We swapped quite a few at 12", and then decided to do some smaller ones to perhaps form a border or something. Who knows.
Posted by Kate North at 11:10 pm

Oooh I like these...The black really makes the shapes pop.

That is a nice block pattern - I don't think I've seen it before. Great fabric.